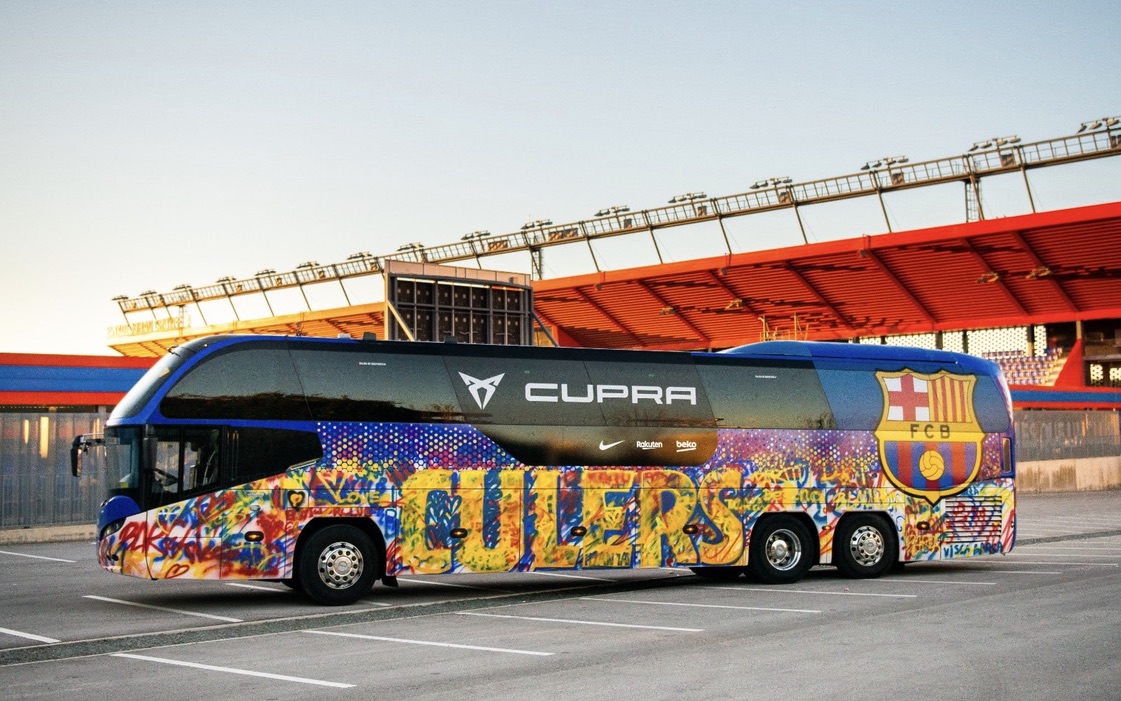 Alves, Ter Stegen, Lenglet, Pedri and Ansu Fati joined by boys and girls from La Masia, beneficiaries of the Barça Foundation and members of the Barça Genuine team

Loyal to its values that have earned it the moniker ‘More than a Club’, FC Barcelona has this year decided to include a number of special groups to reflect its slogan in the de-sign of the bus that the team will be using for trips away from Barcelona. The players Dani Alves, Marc ter Stegen, Clément Lenglet and Ansu Fati have created messages to adorn the vehicle along with young beneficiaries of the Barça Foundation, boys and girls from La Masia and members of the Barça Foundation Genuine team. All of that is being done under guidance from the artist Fert, who is a specialist in the creation of urban murals that highlight everyday scenes.

The workshop to create this new design was held outside the Estadi Johan Cruyff, where the Barça stars were joined by youngsters from Barça’s different teams.

The Foundation representatives were eleven children without adult references on the vocational programme, four from the paediatric emotional wellbeing programme and 13 boys and girls who play for the Barça Foundation Genuine team, They all said how thrilled they were to get the chance to paint alongside their heroes and form part of a project whereby they too shall play a symbolic role in helping them towards sporting success.

Before spray-painting the bus, they all got the chance to learn the basics of art with aerosols, and practiced the technique on specially provided murals.

Inspired by 'More than a Club'

To create the final composition, Fert served as director to help foster coherence be-tween the different messages and pictures that the participants designed. All in all, the outcome is a very graphic representation of why FC Barcelona is ‘More than a Club’.

One of the ideas that the project has fostered is the notion of being ‘More than 11 play-ers’ whereby Barça exercises social commitment through the power of sport to induce change. By combining the players, future generations and the different people in-volved in its social projects, the club has once again showcased just why it is so spe-cial.

The first away trip on which this very special bus will be making an appearance on the roads will be the Champions League game in Munich on December 8.