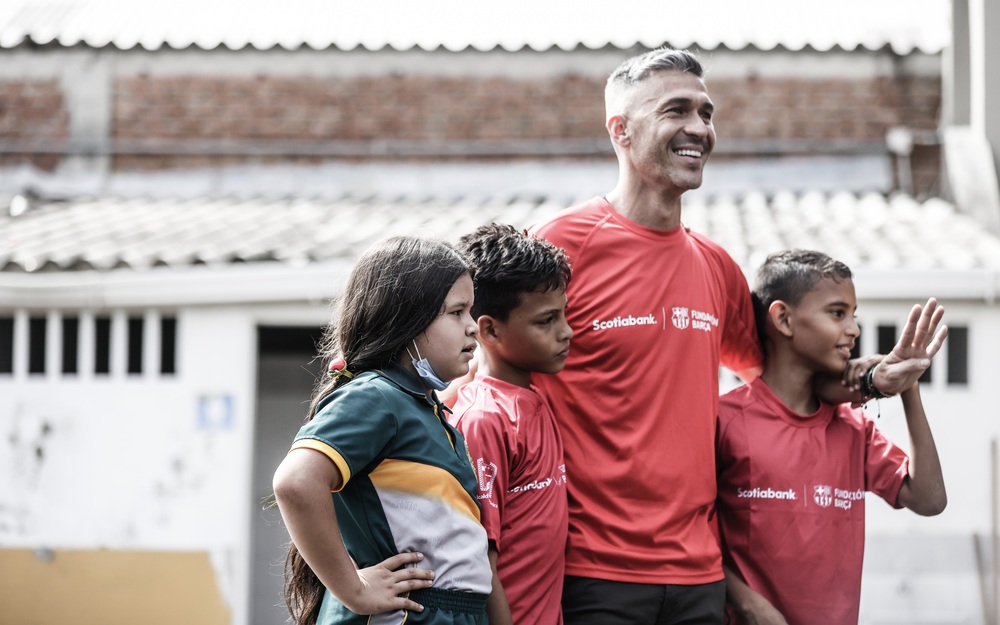 The former footballer of FC Barcelona, Luis García, visited the project of the FC Barcelona Foundation to find out, in person, its impact, accompanied by Andrea Guerrero, renowned ESPN Colombian journalist and the Ambassadress of Scotiabank Fútbol Club, that supports this social project. During the visit they were able to participate in the sessions that the programme offers to the boys and girls of the Colombian municipality with two main objectives: the reduction of violence and the fight against truancy.

The project counts with the collaboration of the Town Hall of Palmira, that has incorporated the programme in its strategy of prevention of violence PAZOS.

Palmira is the city with the most homicides in Colombia. A few years ago it had a murder rate of 100 for every 100,000 inhabitants, only comparable to countries at war. Currently, this figure has decreased to 48, but it is still double the national average. The battle among gangs to control the drug market has created invisible borders between areas that are stigmatised to the point of developing hate relating to identity.

Another problem that boys and girls have in Palmira is truancy, which is above 25%. This high rate is caused by using minors to help their parents at work, the involvement of youngsters in drug trafficking and the migration of the lower class population to the countryside to work. The problem was accentuated after the lockdown due to the pandemic, because lots of boys and girls were not able to continue their classes online because they were not able to get hold of a device to be able to connect to the internet.
The combination of these two problems have caused the lack of opportunities for boys, girls and youngsters in the city of Palmira.

Since April 2021, the FC Barcelona Foundation and Scotiabank, with the collaboration of the Town Hall of Palmira, have developed a programme for the prevention of violence and the promotion of school participation through sport activities with 400 participants.

The city is separated by areas and each one of them by hot spots (areas with a high concentration of homicides). The activities of the project are developed in community sports complexes and educational centres in 10 different areas.

Among the main objectives of the programme is the creation of safe spaces so that the boys and girls can practice sports freely and are not affected by outside violence. Another of the objectives is the breaking of stigmas among boys and girls of different areas separated by invisible borders.

With regard to truancy, the objective of the project is to encourage boys and girls to go to school by carrying out activities in educational centres during teaching hours, and trying to create an extra motivation for the participants to go to school. During these sports activities, curricular learning is incorporated so that the pupils acquire knowledge through sport.

"The project of the FC Barcelona Foundation and Scotiabank promotes the acquisition of skills by the minors in order to resolve conflicts among equals and for them to see that the violence that surrounds them is not the way to resolve disputes."

"The objective is that, through education, the boys and girls have the tools to be able to create a better future, because a whole city can be put in stand-by but this situation cannot last forever. It is necessary to tackle the root of the problem."

"One of the things that has surprised me, is seeing how FC Barcelona Foundation and Scotiabank have taken the time to train the people who are responsible for teaching the boys and girls. It is very important for them to understand that sport is education in free time."