Barça and the un refugee agency announce in Geneva their alliance for protecting refugee children and young people, which will be reflected on the back of the jersey 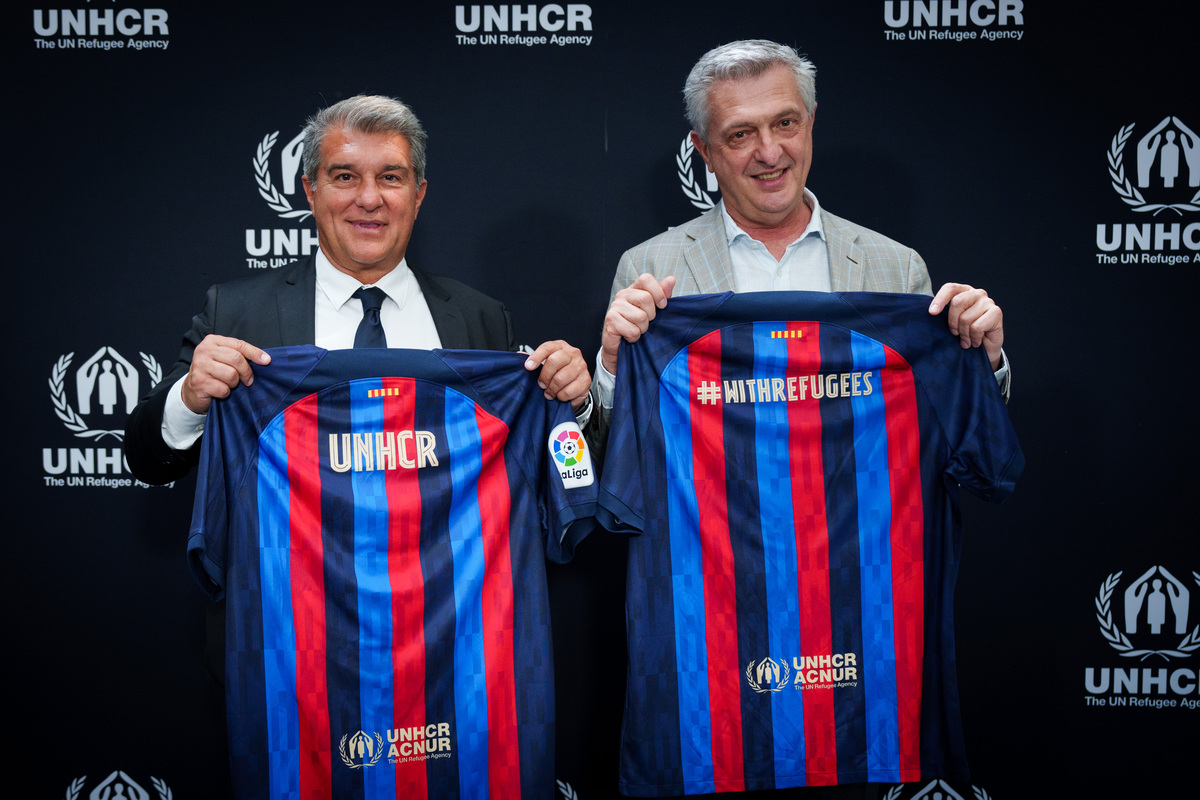 FC Barcelona President Joan Laporta and the United Nations High Commissioner for Refugees, Filippo Grandi, hope that the agreement will bring the cause of refugees to football fans around the world. The Club and the Foundation will collaborate with this humanitarian agency by supporting programmes to help children and adolescents who have been forced to leave their homes, contributing 400,000 euros per season for four joint projects. In this first season, the countries of action will be Colombia, Uganda, Turkey and Malaysia.

Last Tuesday, Barça and the United Nations Refugee Agency (UNHCR), announced in Geneva the alliance that will unite them in defending the rights of refugee children and young people, which will be reflected on the jerseys of the men's and women's football teams. For the first time in history, the UN Agency logo will appear beneath the number on the back of the blaugrana jerseys for the 2022/23 season, which were presented recently, in a gesture that will send a message of solidarity to the world in favour of the more than 100 million people who have been forced to flee their countries.

The event was held at the head office of the United Nations High Commissioner for Refugees (UNHCR) in Geneva and was attended by FC Barcelona President Joan Laporta and the High Commissioner, Filippo Grandi. The two leaders were accompanied by the Institutional Vice-President of FC Barcelona, Elena Fort, and the General Manager of the FC Barcelona Foundation, Marta Segú, as well as representatives of the UNHCR Spanish and Catalan Committees.

The partnership will last four seasons and is a collaboration between FC Barcelona and its Foundation, the UNHCR humanitarian agency and the UNHCR Spanish Committee. Also announced during the event were the holistic projects to support refugee children that will be implemented jointly over the coming years.

In this first season, the projects that both entities will carry out will serve in Colombia to reinforce, through sports, safe and protective environments for children and young people from Venezuela and internally displaced children affected by armed conflicts; in Malaysia to improve the living conditions of Rohingya refugee children and adolescents; in Uganda a project for health, sports and environmental protection for young people in refugee camps and the local population; and in Turkey, to increase the protection, participation and inclusion of children and young people from different countries of origin in the camps in Izmir. 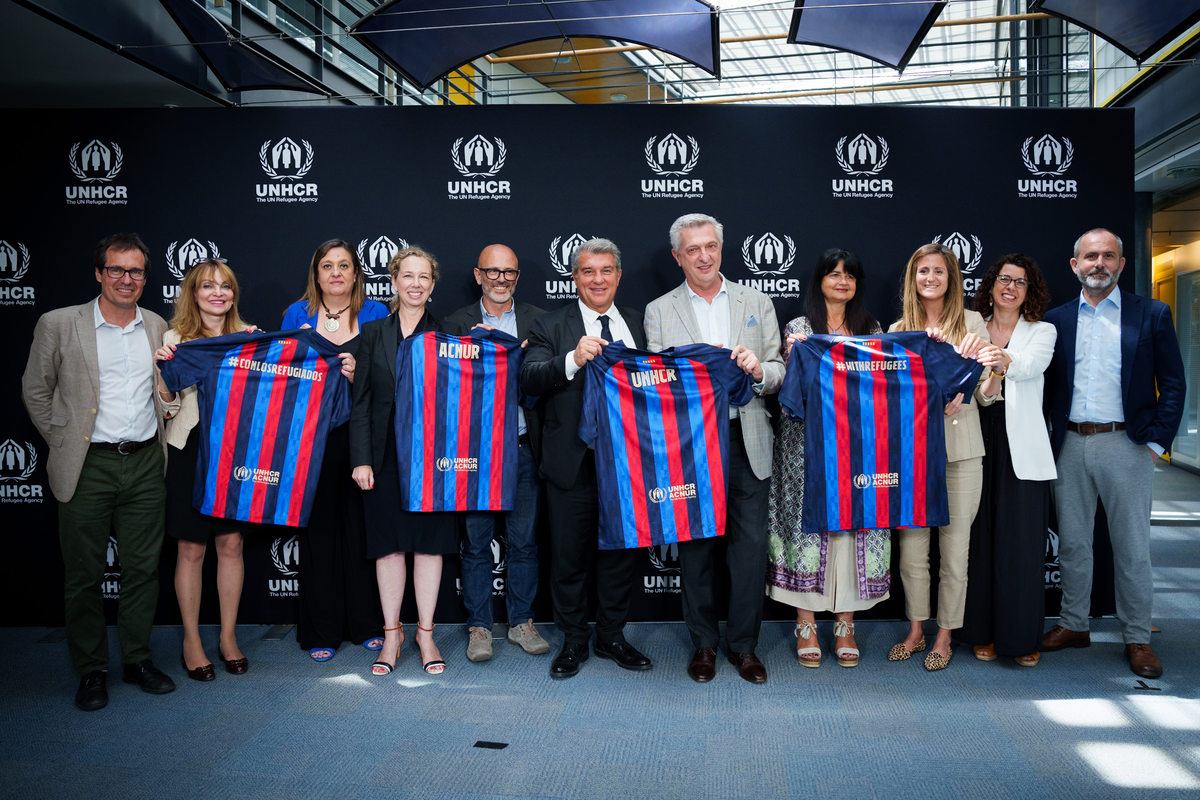 During the event, FC Barcelona, the Foundation, UNHCR and the UNHCR Spanish Committee have assured that they hope that this global agreement will act as a catalyst for change and that other members of the football community and the sports industry in general will also step up to do more to help improve the lives of people forced to flee their homes to other countries as refugees or to other parts of their own countries as internally displaced persons.

FC Barcelona President Joan Laporta said during the event in Geneva: The agreement forms part of the priorities defined by FC Barcelona and its Foundation for this new phase of the Club that I have the privilege of presiding over: to focus on refugees around the world, which is one of the most serious problems that we are currently facing, with 100 million refugees or displaced people (according to UNHCR figures) to whom we need to respond. This figure has increased due to the crisis in Ukraine. With this agreement, UNHCR and FC Barcelona are making an extraordinary commitment to the world. We are fully and absolutely aware of this. Once again, this is FC Barcelona's most difficult match. We are ready to play it. At our organisation we understand that our commitment is to make the dreams of the most vulnerable come true, based on the belief that all children and young people have the right to the same opportunities”.

The director of the FC Barcelona Foundation, Dr. Marta Segú, stated that: “At FC Barcelona we have a social awareness that soon allowed us to understand the power of sports in general and football in particular to improve the lives of children. In 2006, the Foundation began to use sports as the magical tool it is to help the most vulnerable children and young people.  And today, we are still at it, trusting in the magical power of sports in favour of education, health, violence prevention and conflict resolution, placing it at the service of one of the most vulnerable groups in the world: child refugees.

The United Nations High Commissioner for Refugees, Filippo Grandi, said: "Football brings joy to millions of football fans around the world. It also provides a transformative way out for millions of refugee children every day, promoting positive physical and mental well-being, building confidence and skills, helping to keep children in school and empowering girls and boys. Football also has the power to bring together all those who love this beautiful sport, regardless of their background or circumstances, including refugees."

The FC Barcelona Foundation was founded in 1994 to support the most vulnerable children and young people through sports and education in values, with the aim of contributing to a fairer and more inclusive society. The FCB Foundation places its activities within the framework of the Sport for Development programmes and the Sustainable Development Goals of the United Nations 2030 Agenda.

The main lines of action are education and protection, health and emotional well-being, and community action, with a cross-cutting focus on gender equality and diversity in all its forms. Today, the Foundation reaches more than 1.5 million beneficiaries worldwide.

UNHCR, the United Nations Refugee Agency, is a global organisation dedicated to saving lives, protecting rights and building a better future for people forced to flee their homes because of conflict and persecution. It provides life-saving assistance such as shelter, food and water, helps safeguard fundamental human rights and develops solutions to ensure that people have a safe place to call home. It works in more than 130 countries, using its experience to protect and care for millions of people.

The UNHCR Spanish Committee is a non-governmental organisation created in 1993, declared of Public Utility, with more than 500,000 regular members and donors. In Spain, UNHCR raises funds to meet the needs of the most vulnerable refugees and displaced people, supporting UNHCR's humanitarian aid programmes around the world.