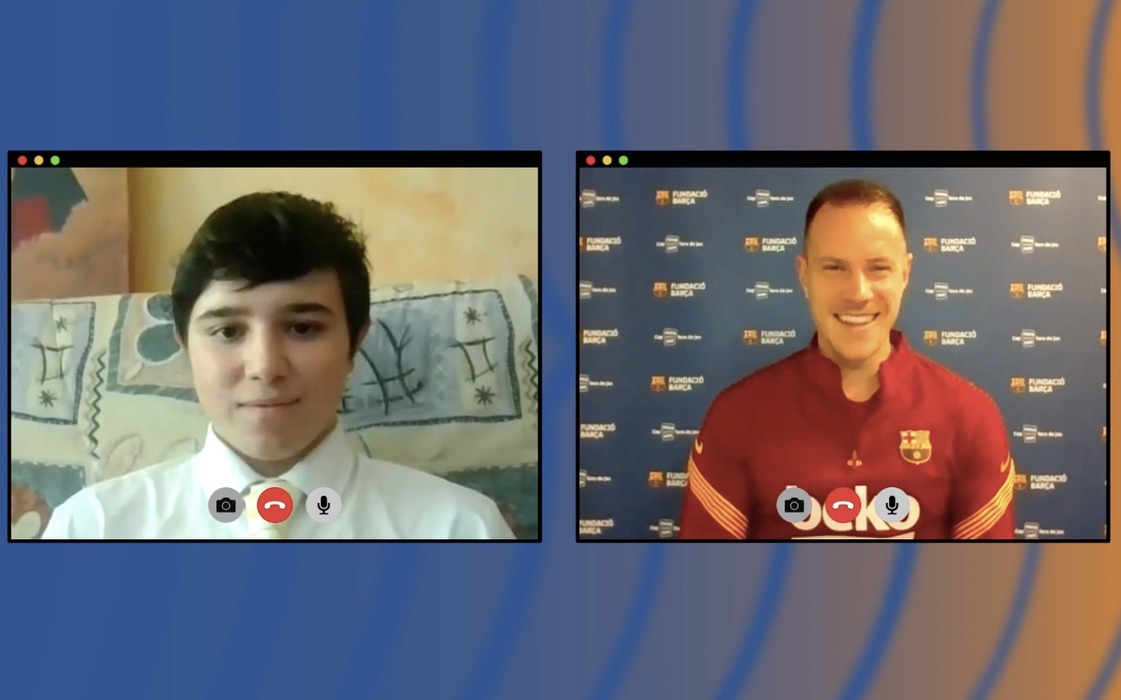 As stated by doctors and families, meetings with famous footballers help boost the emotional wellbeing of sick children

In recent weeks, Marc-André ter Stegen, Pedri González and Riqui Puig of the FC Barcelona senior team have held online meetings with three children suffering from serious illnesses or that in the process of recovery. These meetings form part of the FC Barcelona Paediatric Emotional Wellbeing Program, which has been operating online since the outbreak of the pandemic.

The children have told the players how they are coping with lockdown, and what it means to them to be able to chat to their idols. And the players took the opportunity to tell them how much they admire these children for their bravery in facing up to their illnesses, which mean spending so much time in isolation. Getting to speak to the FC Barcelona players was an injection of vitality and optimism in their lives.

Pedri chatted to 18-year-old Lluís Boada, who lives in Valls (Tarragona). He studies at home and rarely goes out because of his illness, congenital muscular dystrophy. He loves to play on the PlayStation and watch football matches.

Riqui Puig was talking to 14-year-old José Luis Domínguez who lives in Barcelona and has a brain tumour, because of which, as well as Covid-19, he studies at home. He loves trains, Lego and sport, as well as listening to sports news.

And Ter Stegen contacted 15-year-old Miguel Ángel from Andorra, who is recovering from a cancer-related disease. He truly loves footballs and his dream is to become a sportswriter.

It has been demonstrated that emotional state and a favourable environment play a key role in the efficacy of treatment and improve the recovery processes of sick children. That is why the Barça Foundation, in aware of the way that Barça and its players are able to generate positive emotions, is running this program to support these children and their families.

To help improve the quality of living of children in hospital and with complex diseases, the Barça Foundation has for several years now been working together with the leading children’s hospitals in Catalonia, which are treating children with very serious illnesses, as well as other major institutions in the sector.

“Actions like these with the players, not just from the football team but also the other sports played at the club and which we hold all year round, are emotional reinforcement for children suffering from serious illnesses. Families and doctors appreciate such activities because they produce a big improvement in children’s emotional wellbeing.”

11 May 2022 One Team ambassadors visit the Juvenile Detention Centre