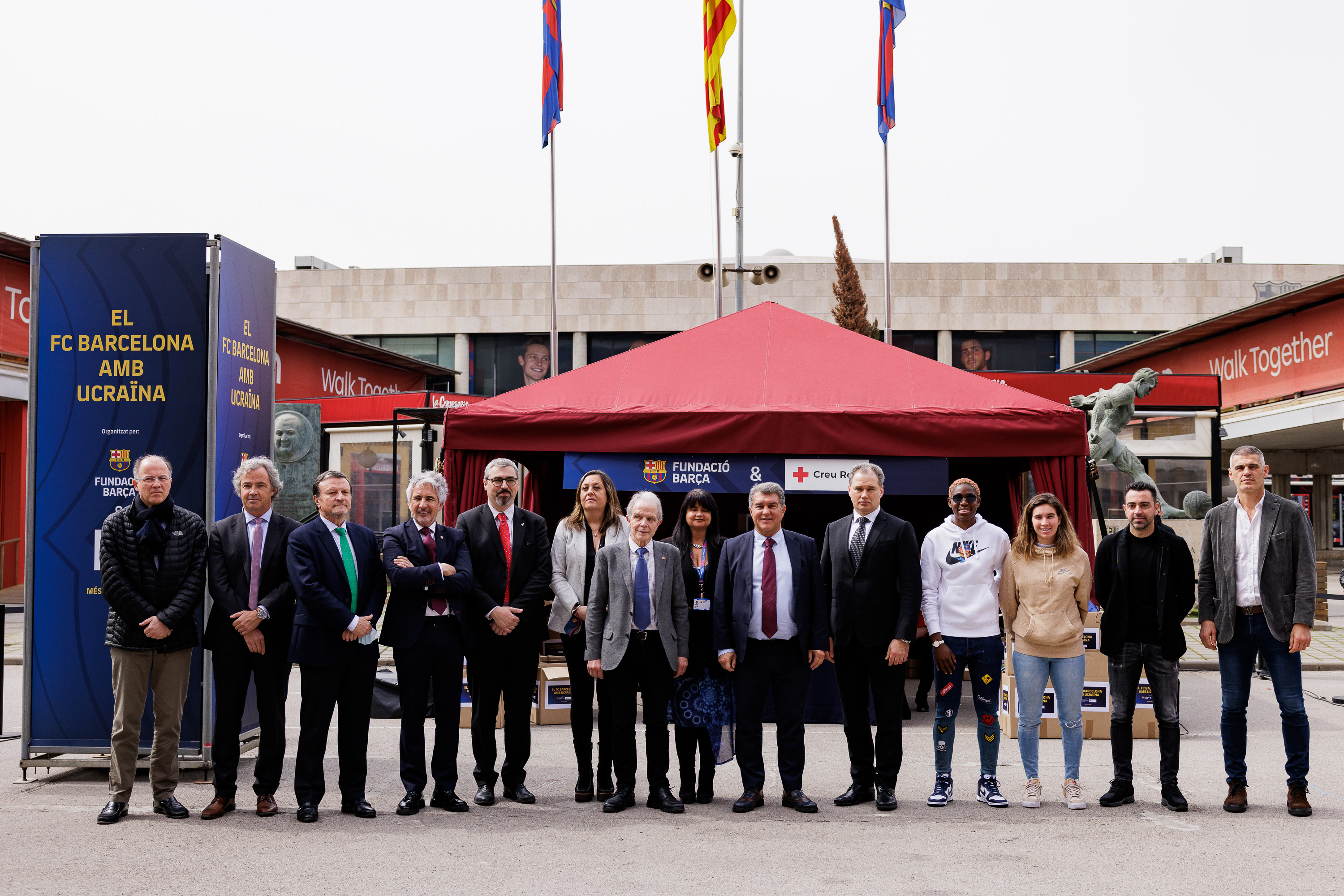 The event in support of the Ukraine was attended by the president of the Catalonian Red Cross, the coach of the men's first team Xavi Hernández and the women's team players Mariona Caldentey and Asisat Oshoala

"I would like to call on Barça members and supporters attending the women's Champions League match next Wednesday to bring food products for children, which is needed to help Ukrainian families who have arrived here in Catalonia. With this act we show that we are more than a club. That the blaugrana family is more than a family", declared Joan Laporta, president of FC Barcelona, during the event supporting Ukrainian families that took place this morning on the terrace in front of the Camp Nou stands and with which FC Barcelona started its campaign to collect food for children in collaboration with the Catalonian Red Cross.

The presentation ceremony for tents at the Camp Nou, which will remain open over the next few days to collect food for babies and children, was attended by Dr. Marta Segú, general director of the Foundation, Artem Vorobiov, Ukrainian consul in Barcelona, Josep Quitet, president of the Catalonian Red Cross, Elena Fort, vice-president of the institutional area, Xavier Puig, director in charge of women's football, Enric Masip, member of the cabinet of the FC Barcelona presidency, Andrei Xepkin, Ukrainian former FC Barcelona handball player, and members of the Board of Trustees from the FC Barcelona Foundation.

Xavi Hernández, coach of the first team, in addition to Mariona Caldentey and Asisat Oshoala, players of the women's first team, also showed support for this campaign. 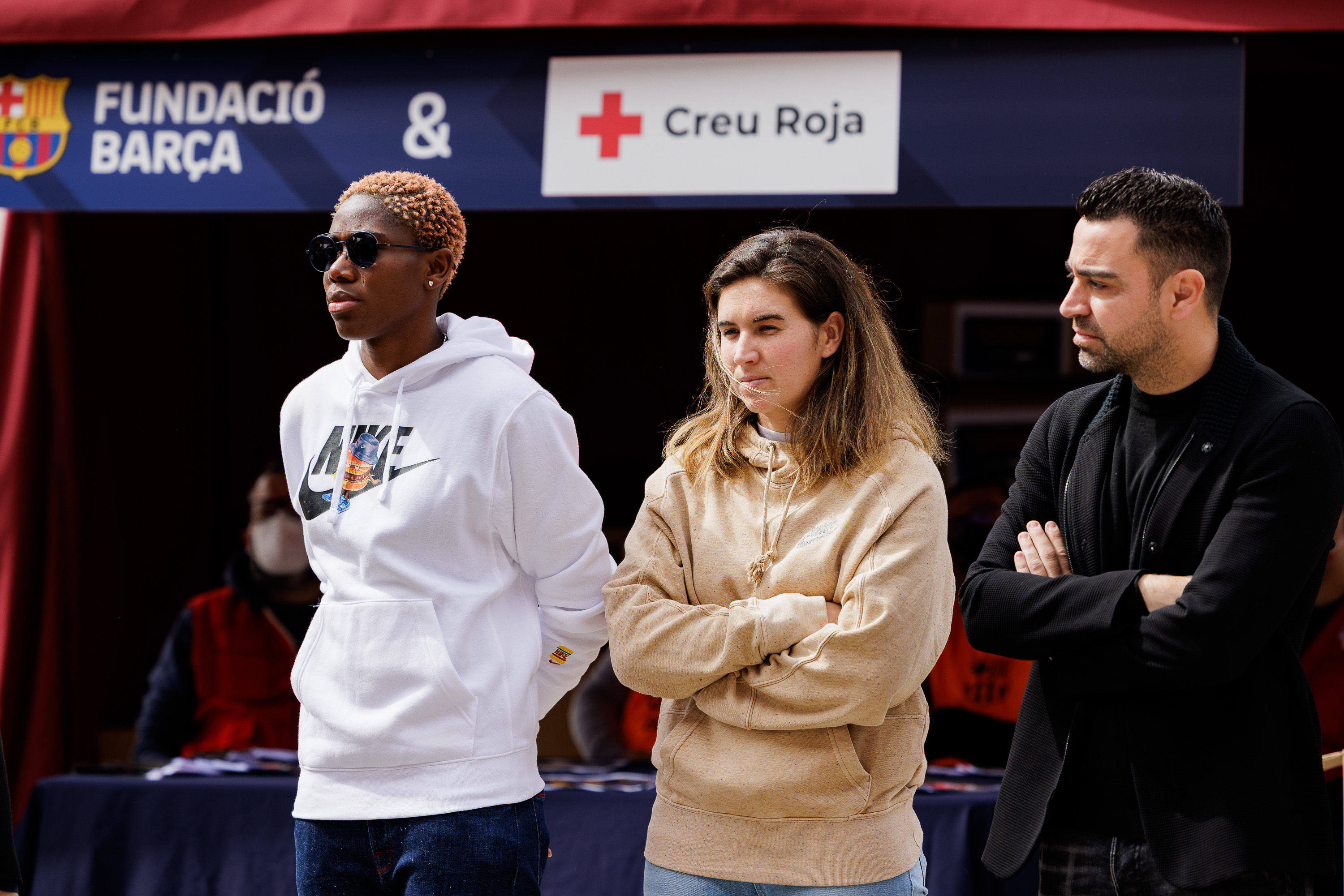 During the event, the first donations were received from Club and FC Barcelona Foundation employees, as well as various partners and collaborating companies. The captain of the futsal team, Sergio Lozano, and representatives of the Barça Academy were also present.

Marta Segú, director general of the FC Barcelona Foundation, said: "We want to deliver this aid effectively and we do so in collaboration with the Red Cross, who are experts in channelling these charitable contributions. Today Barça's heart beats for all Ukrainians, for the refugees of this war and for all the refugees in the world".

The Councillor for Ukraine, for his part, explained that "every day more and more Ukrainian people are arriving in Spain, and most of them enter through Barcelona". He added: "They all need help. I would like to thank the president of FC Barcelona, the director of the FC Barcelona Foundation and the president of the Red Cross for setting up this initiative, which is so necessary for our people."

Josep Quitet, president of the Catalonian Red Cross, wanted to highlight the collaboration with FC Barcelona Foundation, especially in situations like this. "From the very first moment, they contacted us to offer their help with whatever we needed and we asked them to help us attend to the thousands of people who are arriving from Ukraine.” He also called for any help to be channelled through the organisations that work there on a regular basis.

The products the Red Cross has recommended as most necessary are the following:

A team of Red Cross volunteers and Club employees will oversee the collection of these products in the tents, which the Red Cross will then take to their logistics Humanitarian Centre in San Martí de Tous (Anoia). From here, they will deliver them to Ukrainian refugee families and other families assisted by the organisation who are highly vulnerable and face situations of social risk.