“Together, we are more. More than a club” 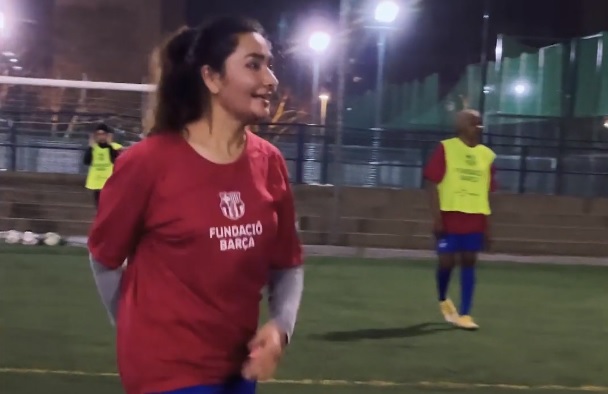 From Yuiko Inoue, local coordinator of the foundation’s projects in Japan, to Dr Marta Segú, general manager of Fundación FC Barcelona, nine women star in a video produced for the foundation to mark International Women's Day on 8 March.

“Together, we are more. More than a club” is the leitmotiv of a video designed to draw attention to the women of the Fundación FC Barcelona: social educators, programme coordinators, coaches, and beneficiaries of the foundations many projects around the world. Among those featured are Beth Puigdesens, coach of the Fundación Barça Genuine team; Ester Morillas, head of diversity, protection, and prevention of violence; Maite Laporta, head of diversity and inclusion at FC Barcelona; Federica Minardo, social educator at the Cooperativa Prospettiva in Italy; Fereshteh Rafat, beneficiary of the SPRING project funded by the European Commission in Catalonia; Eirini Lorentzatou, trainer at the foundation’s project with Organization Earth in Greece, and Chaima Moumou, coach at the Spring Catalonia project

The video shows scenes and images of several Fundación FC Barcelona projects around the world and its socio-educational methodology based on sport as a tool for social inclusion and gender equality with which to breach down barriers, particularly in countries where women’s rights are not guaranteed.

This initiative is among the events organised by FC Barcelona to celebrate International Women’s Day with the motto: “The line doesn't divide us, it unites us”, and which is transforms the lines on the pitch at Camp Nou, the Johan Cruyff, the fields of the Ciudad Deportiva (Sports City) and the Palau Blaugrana in a show of support for women's sport. The Club’s commitment is highlighted through the “More than gender” concept, that encompasses all its actions to promote the role of women in the world of sport and society at large and to raise awareness of the organisation's commitment to women’s sport in this case, and women’s role in sport in general.