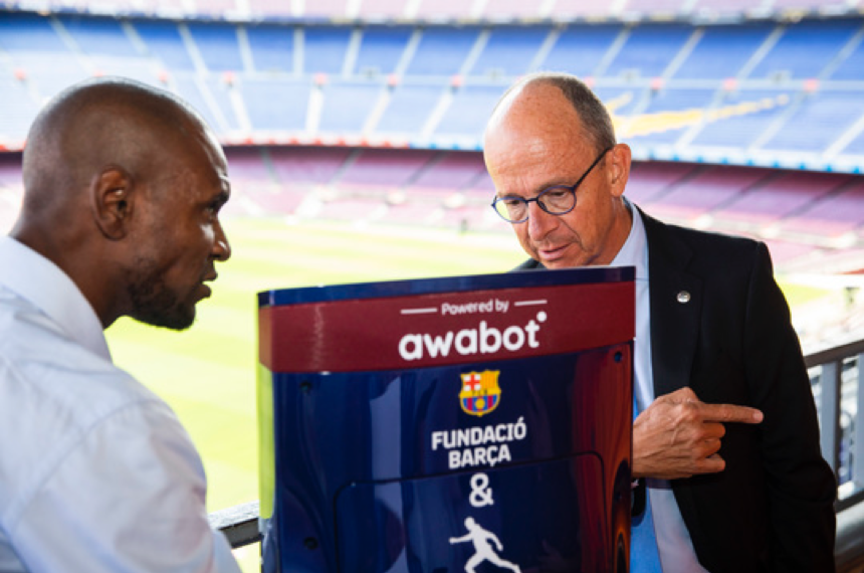 The Robot Pol joint programme between the Barça and Éric Abidal Foundations has been named among the candidates for the Peace & Sport awards, presented by this international, independent organisation based in the Principality of Monaco and promoted by Prince Albert II.  Their aim is to honour organisations and people who have made outstanding contributions to peace, dialogue and stability in the world through sport.

Robot Pol has been nominated because it is such a socially innovative project that helps boost the wellbeing and quality of life of children suffering from cancer or other serious illnesses. The programme was set up by the two foundations in 2017, and offers children in hospital the chance to visit the Barça Museum or Camp Nou, and even to meet first team players, via a robot that’s controlled remotely by the child.

On December 11, 12 and 13 the Principality of Monaco is the venue for the Peace and Sport International Forum, involving major figures and representatives of agencies, governments and organisations around the world, including the first vice-president of FC Barcelona and the Barça Foundation, Jordi Cardoner, who is taking part in a round table debate on the second day of the event, the topic being the importance of investing in sport for development projects in order to foster security, peace and prosperity, especially in the communities at the greatest risk.

In turn, Éric Abidal, technical secretary of FC Barcelona and president of the Foundation bearing his name, will also be taking part in the forum with a talk on how philanthropy can be used as a means to prevent, mitigate and solve conflicts.

Later, on the same December 12 the Peace & Sport Awards will be presented at an International Gala, with eleven different prizes on offer to exceptional programmes that have fostered peace through sport. The Barça and Éric Abidal Foundations have been nominated for one of the most important, the Special Jury Award.

Foundation of the Year Award 2017

Two years ago, the Barça Foundation was named Foundation of the Year at this event in recognition of its work for refugees and migrants. The first vice-president of FC Barcelona and its Foundation, Jordi Cardoner, collected the award after previously having told the forum about the scope of the programme that the Foundation has been running since 2016 in refugee camps, settlements and centres for unaccompanied minors in Lebanon, Greece, Italy and Catalonia. In recent years, the programme has benefitted more than 24,000 boys and girls.

The idea of Peace & Sport is to work with communities that have been distanced and where traditional politics has not engendered dialogue. The goal is to build peaceful communities through sport, to create a safer, fairer and more inclusive world.

The Peace & Sport awards were created in 2008 and have honoured specific programmes or global initiatives, and showcase how the values of sport can conciliate respect, tolerance and solidarity.

The awards are part of the Annual International Forum, the most important event in the world for sport and peace. The Forum gathers more than 600 major representatives of companies and institutions from more than 110 countries, including heads of state, Nobel Peace Prize winners, governmental sports agencies, elite athletes, international organisations, NGOs and academics.