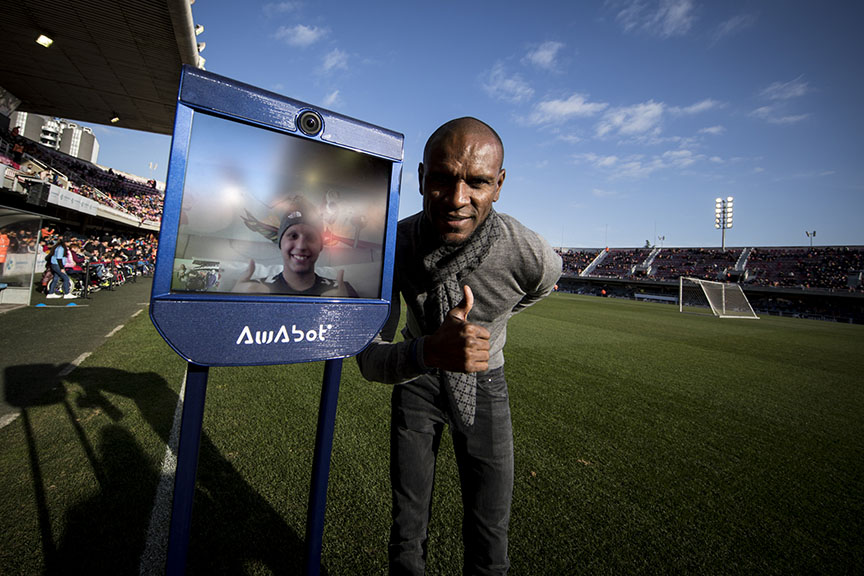 The Barça Foundation, Eric Abidal Foundation and Olympique Lyonnais Fondation share this pioneering project that allows hospitalised children to have a special experience

A child hospitalised in the Vall d’Hebron facility in Barcelona will be able to watch the arrival of the Barça players at the Groupama Stadium live on Tuesday, via Robot Pol. They will also share the experience with another hospitalised child in the city of Lyon, who will control a robot with the same characteristics.

The Olympique Lyonnais Fondation, the Eric Abidal Foundation and the Barça Foundationshare this innovative program that allows children who have been admitted to hospital the opportunity to enjoy an unforgettable experience.

The Robot Pol project allows virtual visits to the Barça Museum and Camp Nou through a remote-controlled robot, moved around by the child from their hospital room through a computer, with a camera and internet connection and with the support of a volunteer of the Barça Foundation. Occasionally, the robot may also be used for other experiences, such as ‘attending’ a match or an open training session.

The robot has two camera that offer a complete view, and seven internal microphones that reduce background noise and allows interaction. This robot has been developed and distributed by the company AWABOT. This initiative began more than a year ago as a result of a proposal by the Eric Abidal Foundation to the Barça Foundation, and is now part of the Pediatric Emotional Wellbeing programme that collaborates with the main pediatric hospitals in Catalonia.

The name of the robot is a tribute to the first child to benefit from the pilot project, Pol, who passed away just weeks after the experience.

The Olympique Lyonnais Fondation are pioneers in this project, undertaking it since 2016. More than 50 boys and girls have been able to watch matches, training sessions and even concerts and other events through the scheme.

Tomorrow it is expected that the two robots will meet at the entrance of the Groupama Stadium at 7pm and go to the dressing room tunnel together to greet players from the two teams. They will then head to the stands to greet representatives, before descending to the pitch to watch the warmup and start of the game.