Technology unites the Barça Foundation, the Éric Abidal Foundation and the Olympique Lyonnais Foundation to boost the emotional wellbeing of boys and girls in hospital 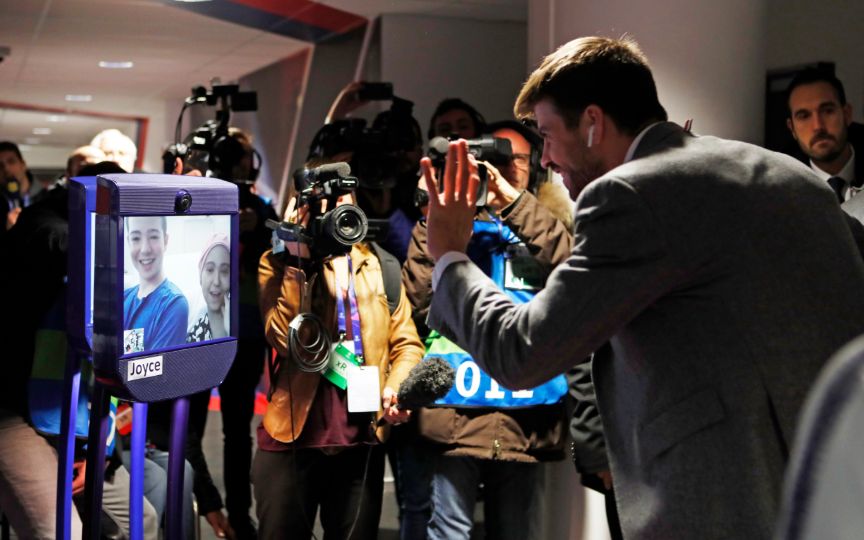 The Barça Foundation, the Éric Abidal Foundation and the Olympique Lyonnais Foundation are sharing this ground-breaking project to offer an unforgettable experience to hospitalised children

Joyce is a young girl at Vall d'Hebron Hospital in Barcelona who, thanks to Robot Pol, was there live for the arrival of the Barça players at the Groupama Stadium in Lyon and to see them warm up prior to their Champions League round of 16 encounter. First team players, including Messi, Suárez and Piqué, were able to interact with her outside the dressing room, and the robot was then taken to the grandstand box where Joyce was able to say hello to the authorities.

Jibryl, a boy in hospital in the city of Lyon, was able to share Joyce’s experience thanks to a similar robot belonging to the Olympique Lyonnais Foundation.

The three foundations are working together on this innovative programme to offer the chance for children in hospital to enjoy an unforgettable experience. They are able to forget their troubles for a while and enjoy something quite extraordinary.

The robot has two cameras, one at the top and one below, which offer an all-round view of the surroundings, and seven inner microphones to isolate the audio. Technically developed and distributed by the AWABOT company, the project was set up just over a year ago at the behest of the Abidal and Barça Foundation and is now an integral part of the Paediatric Emotional Wellbeing Programme in collaboration with the biggest children’s hospitals in Catalonia.

The robot is called Pol in honour of the first child to benefit from the pilot test, who sadly passed away a matter of weeks after one of his dreams had come true as he got to visit the Camp Nou and the Barça Museum.

The Olympique Lyonnais Foundation was the first club to implement such a project in 2016. Since then, more than 50 boys and girls have benefitted from it by experiencing team training sessions and the build-up to games in the Lyon stadium, and even concerts and other events.