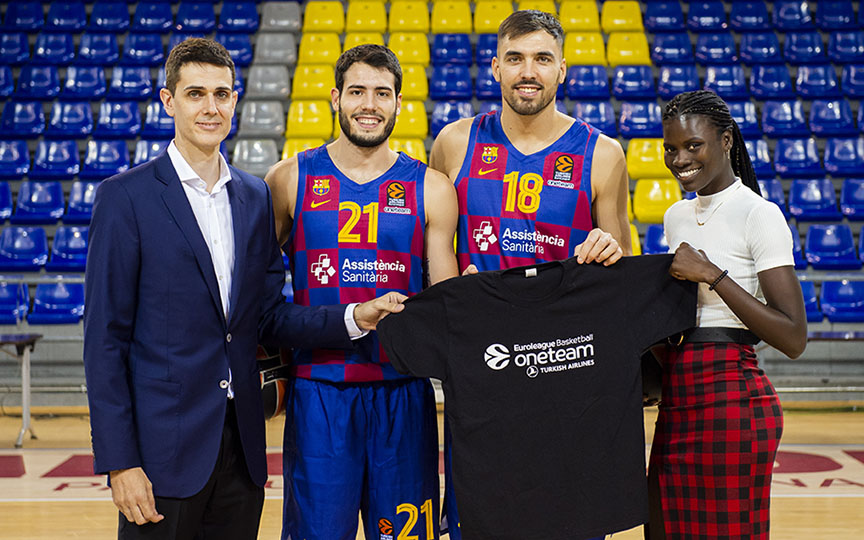 This afternoon the Palau Blaugrana was the venue for the start of a new season of the One Team programme, where the ambassadors were presented for the programme set up by the Euroleague, in partnership with the Barça Foundation, Barça basketball team and the Catalan Government Department of Penitentiary Services. Àlex Abrines is the latest ambassador, joining Pierre Oriola in representation of the basketball first team. Also involved are Magatte Niang of the CBS Barça Women’s Team and Rodrigo de La Fuente, who captained Barça from 1997 to 2007 in representation of the veterans.

This is the second time that the One Team project has worked with Quatre Camins juvenile penitentiary centre in Roca del Vallès. It will use the FutbolNet methodology, applied to basketball, to work on the values of Barça and its Foundation with any inmates who want to take part in the project. Last season 52 youngsters were able to benefit from the programme.

The idea is to use basketball as a means to prevent violence, and to foster social inclusion, gender equality and values among young people.

"Our goal in this program is to help the interns in the penitentiary center. It is a great way to give back to the community all the support we receive during the year."

“It feels amazing to be able to help these youngsters. I think it is a good opportunity for them to forget for a while about their current situation.”

“To be part of this project is always enriching. It gives me the chance to see new realities.”

“Basketball is an exceptional tool to improve these youngsters conditions and values. It might even give them a chance to a better future.”