FC Barcelona presents the Club and Foundation's Child Protection System, the first of its kind in Spain 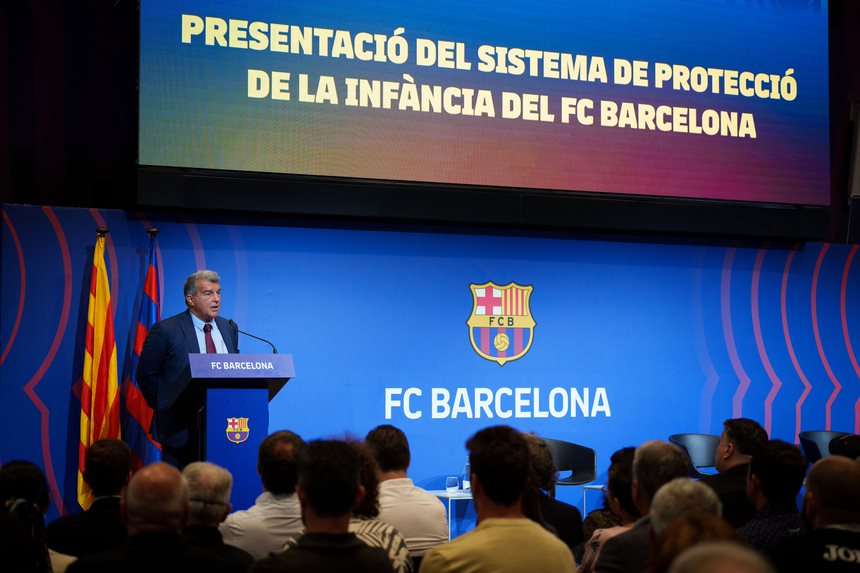 This innovative system prevents any type of violence against the 200,000 children and young people in La Masia, the Barça Academies, amateur sports and any of the Foundation's programmes.

FC Barcelona has presented its FC Club and Foundation Child Protection System, the first of its kind in Spain, which directly or indirectly covers almost 200,000 children and young people from the different areas in which the Club (La Masia, Barça Academy, amateur sports) and the Foundation operate. This system includes the new protection policy, the protocol for action and other actions for the prevention, monitoring and management of any type of violence: physical and verbal violence, sexual abuse, neglect and bullying, with the aim of promoting a space of zero tolerance, safe spaces and spaces for protection.

The president of FC Barcelona and its Foundation, Joan Laporta, accompanied by the Secretary General for Sports and Physical Activity of the Government of Catalonia, Anna Caula, presented this child protection system last Thursday at an event held at Auditori 1899, which was also attended by the Director General of the FC Barcelona Foundation, Dr Marta Segú, the Chief Compliance Officer of the Club, Sergi Atienza, the psychologist and consultant at the children's consultancy firm Espirales, Francisco Javier Romeo; and the international expert in children's rights and former head of Children's Rights and Sports Values at the Council of Europe, Elda Moreno.

The objective of the system is to guarantee the comprehensive well-being of all these children and teenagers who are part of the Club and the Foundation. To achieve this, efforts are made to ensure that all safe and protective spaces and environments are based on a focus on children's rights and the best interests of each child and teenager.
It is worth mentioning that the Special Representative of the United Nations Secretary-General on Violence against Children, Dr Najat Maalla M'ijd, participated in the event through a video in which she congratulated the Club for this initiative and encouraged other institutions and sports clubs to implement similar systems.

Culmination of a long project

Historically, FC Barcelona has always been concerned about personal well-being, especially that of children and teenagers. The 2017/18 season saw a deepening of the protection of children through the creation of the first risk policy in sports with minors, and the launching of specific annual training sessions for internal staff in this area. Over the last few seasons the system has evolved, as it has been implemented in different groups and projects and been adapted to the various legislative innovations that have arisen in recent times. Thus, this protection project, which was launched three seasons ago, has now culminated with the incorporation of the regulatory and legal changes of recent years and the extension of the duties of the protection delegates and consultants, a function that has been incorporated into every team in the Club's different areas of action, and whose mission is to implement all the preventive actions and to monitor any situation of risk or vulnerability that may arise.

In recent years, we have worked alongside the Children's Consultancy Firm Espirales, an organisation with expertise in child protection, formed by internationally renowned professionals in the field, and which has collaborated with organisations such as the National Sports Council, UNICEF, the Council of Europe, etc., in our commitment to aligning the project with the highest international standards in the field of child protection.

The scope of the system encompasses the prevention of any type of violence, and applies to all FC Barcelona groups in which children and teenagers participate:
•    La Masia (550 minors): the Oriol Tort residence, training football and professional sections (football, basketball, handball, roller hockey and futsal).
•    Barça Academy (24,000 minors): our schools, which are the Barça Escola, Barça Academy New York, and Barça Academy Miami, as well as all camps and workshops organised by the Club. Furthermore, together with the partners of each of the Barça Academy schools around the world, the Club will ensure that a child protection system is implemented in each of these schools that guarantees the same objectives as the system.
•    Amateur sports (800 minors): roller skating, field hockey, volleyball, ice hockey, rugby, athletics.
•    Other Club activities involving children and teenagers.
•    FC Barcelona Foundation (158,800 beneficiaries): Every child and teenager participating in the programmes, both nationally and internationally.

The Child Protection Policy is the general framework that describes the actions and measures applied in this area. These can be grouped into four main blocks:
1.    PEOPLE: Those in charge of looking after the children and teenagers. These people have to guarantee that the children and teenagers are treated well and prevent, detect and act in the event of situations of risk or vulnerability. Furthermore, the system has a Code of Conduct that every person who is in contact with minors must commit to observing from the moment they join the Club or the Foundation.

2.    ENVIRONMENTS AND ACTIVITIES: Safe and protective environments are required to guarantee the safety and well-being of children and teenagers. These are achieved by identifying potential risks and applying the guidelines and measures designed to reduce and/or eliminate them.

3.    SITUATIONS: Despite all the precautions taken, there will be situations of vulnerability, of conflict between equals or even of suspicion or evidence of risk for children and teenagers. This is why the system has an action protocol that sets out in detail the actions to be taken in each of these situations, as well as specific circuits per territory.

4.    ORGANISATION CULTURE: Various cross-cutting processes of the organisation have been adjusted, such as selection and hiring standards, training plans and prevention and awareness-raising actions aimed at children, teenagers and their families.

Statements by Joan Laporta, president of FC Barcelona and the Foundation

"Talking about issues such as physical or verbal aggression, bullying, neglect or, especially, sexual abuse have always been taboo subjects in our society. However, FC Barcelona, as an organisation that holds itself accountable to the society to which it belongs, wants to improve the prevention of any type of violence against children and young people who take part in any Club or Foundation activity, and we want to go further, because it is an issue that concerns us and in which we also want to be leaders".

"The Club has always protected its children, following the current regulations or going beyond them at certain times where it has been a pioneer, as in the case of the launch of La Masia, and we will also be a pioneer now with this ground-breaking protection system in our country".

"The main objective of this protection system is to guarantee the comprehensive well-being of all these children and teenagers who form part of the Club and of the different Foundation projects".

"One of the main highlights is to ensure that all spaces are safe and protective environments based on a focus on children's rights and the best interests of each child and teenager".

Statement by Sergi Atienza, Director of the Compliance Department at FC Barcelona

"In recent years, changes in regulations and laws have meant that since the 2017/18 season we have started this project to put in place a system for the protection of children and young people who take part in Club and Foundation activities, in all their sections and sports. We can now present it because we have defined a comprehensive system with its own policy and protocols that allows us to exceed the main goal of protecting our children".

"Making all these policies and protocols public is a key element for prevention. Because this transparency reveals all the standards and protocols that we have in place at the Club to avoid any kind of violence against our children. Any person, company, entity, etc. must adapt to them and we will show them to everyone".

14 June 2022 Barça and the un refugee agency announce in Geneva their alliance for protecting refugee children and young people, which will be reflected on the back of the jersey