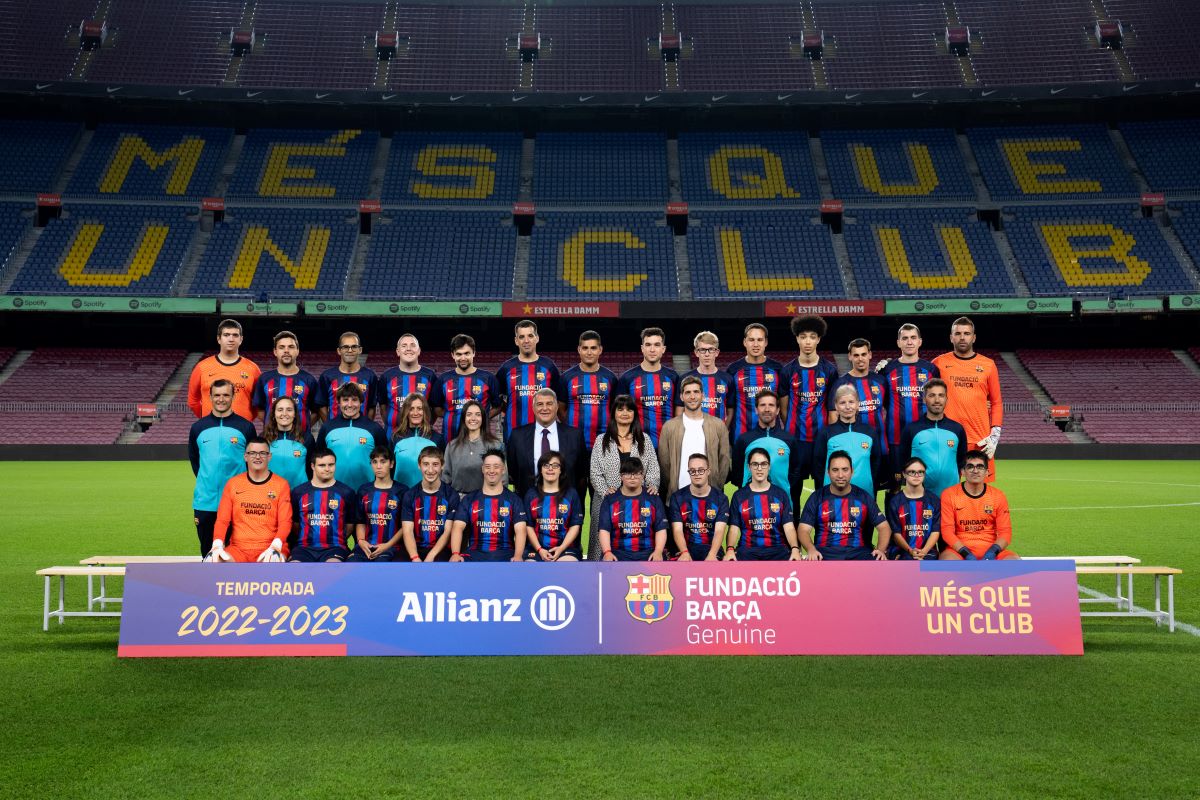 This team's players were presented at the Spotify Camp Nou after the première of the short film 'When winning everything is not the most important part', which reviews their experiences from last season

An official photo of the Barça Foundation squad, alongside the coaching staff, ambassadors Aitana Bonmatí and Sergi Roberto, the director general of the Foundation, Marta Segú, and the president, Joan Laporta, ended the team's magnificent presentation ceremony, which was held today at the Spotify Camp Nou and the FC Barcelona Museum. The champions of the LaLiga Genuine 2021/22 'Compañerismo' team-spirit group now treads the same stage as the first team and with full media attention. Tomorrow, they will travel to Tarragona, where they'll start LaLiga Genuine 2022/23 this weekend.

The players of the Barça Foundation will not forget this day in which they walked out through the tunnel of the Stadium's dressing rooms, one by one, as they heard their names called out, and performed the famous haka again in the company of the Club's president, the director general of the Foundation, and its ambassadors.

Àngels Prieto, the presenter of the event, spoke briefly with one of the players from the Barça Foundation, Yenny Cabanillas, with coach Josep Ferré, and also with Aitana Bonmatí and Sergi Roberto, before president Laporta took the floor to underline how much of a success the creation of this team has been, for all the positive things it has brought to its players, and how he was particularly proud of their behaviour and the effort they have shown. "It's time to start a new season. With new additions to the team and to the coaching staff, but with the same enthusiasm and the same objective of competing to win and continuing to growing as people", he concluded.

A presentation was made in the audiovisual room on the second floor of the museum before the event that took place at the Spotify Camp Nou. In this initial presentation, 'When winning everything is not the most important part', the twelve-minute short film produced by Barça Studios draws upon the experiences of the Barça Foundation in its début season, and the success it achieved both on and off the pitch.

The event was attended by the Minister for Social Rights of the Generalitat de Catalunya, Carles Campuzano, the director of the Catalan Traffic Service and member of the Accessibility Council of Catalonia and the Social Council of the Guttmann Institute, Ramón Lamiel, and Ramon Vilà, representative of the Les Corts district.

Début in LaLiga Genuine 2022/23 this weekend

Tomorrow, Friday 11 November, the Barça Foundation team will travel to Tarragona to play out the first phase of LaLiga Genuine at the Futbol Salou Sports Centre. The winning team in last year’s 'Compañerismo' team-spirit group will be playing this 2022/23 season in the 'Deportividad' Sportsmanship group and will début on 12 November against Valencia CF and UD Almería, at 10AM and 4PM respectively. On the following day, Sunday 13 November, they will play against CD Leganès, at 12 noon.