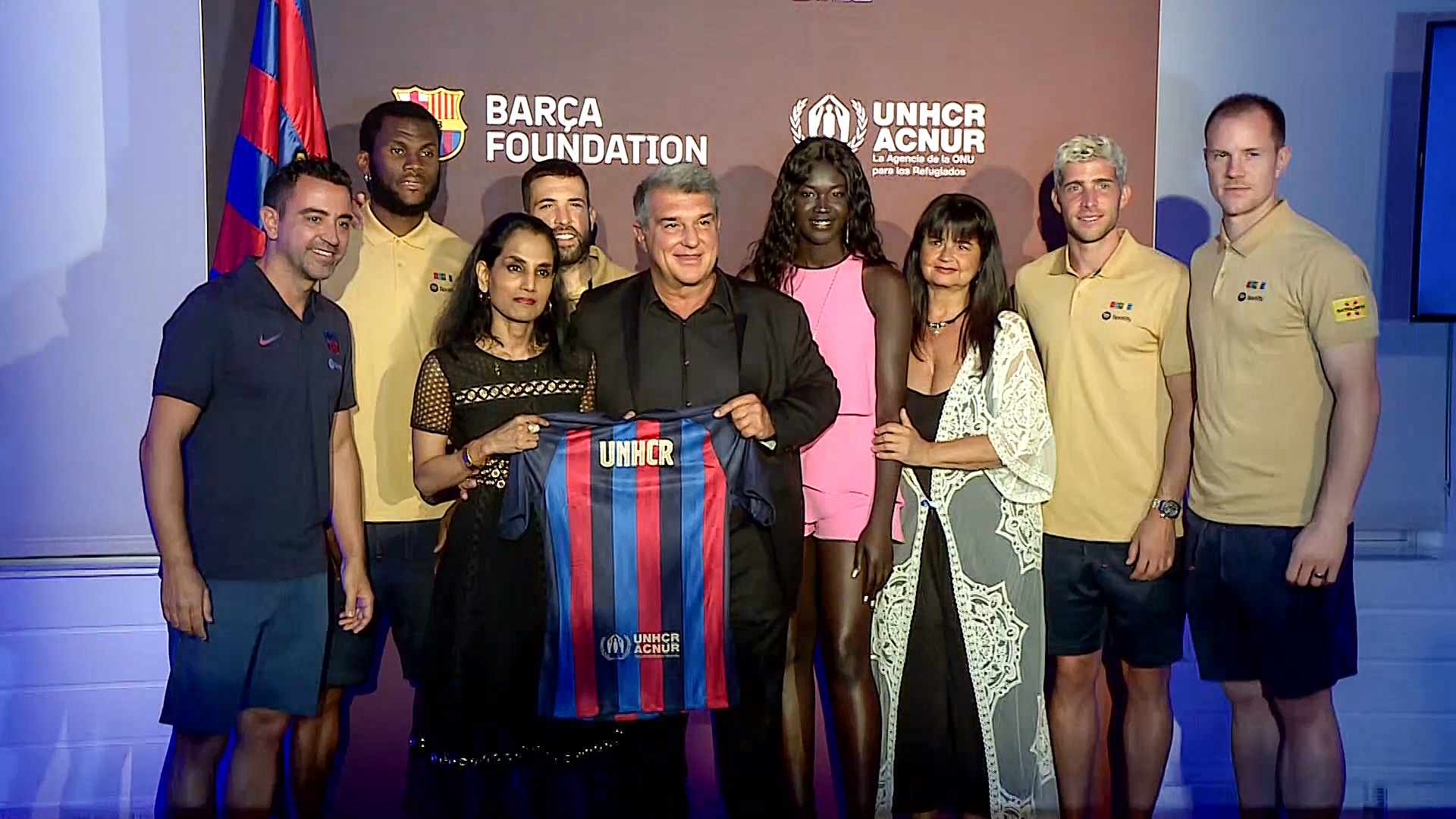 FC Barcelona and its Foundation have taken advantage of the Barça in The US Summer Tour, the club’s pre-season tour in the United States, to announce its new strategic alliance with UNHCR/ACNUR, to globally fight for the rights of refugees. The event was held at Rockefeller Center in New York, with the presence of FC Barcelona president Joan Laporta, the United Nations High Commissioner for Refugees, Filippo Grandi (through a recorded video message), the Mayor of New York City Hall, Eric Adams, the Director of UNHCR’s Office in New York, Ruvendrini Menikdiwela, and the director general of the FC Barcelona Foundation, Dr. Marta Segú. It was also attended by coach Xavi Hernàndez, and several first team players: , Jordi Alba, Marc André Stegen, Sergi Roberto and Franck Kessie. Former Barca stars Thierry Henry and Juliano Belletti also attended the event, as well as South Sudanese-born refugee and activist Mary Maker.

Both Joan Laporta and Filippo Grandi spoke of how, thanks to the global popularity of Barça and the power of sport and football, the partnership can highlight the current plight of 100 million displaced people and refugees, many of them children and young people.
Marta Segú, the general director of the Foundation, explained the details of the alliance and how UNHCR and the Barca Foundation will work together. One of the first outcomes of the alliance is that the men's, women's and Genuine football teams will all wear the ACNUR / UN Refugee Agency’s logo situación actual on the back of their shirts.

The mayor of New York also addressed a few words to the attendees and in his speech thanked FC Barcelona for the solidarity work it carries out and especially its alliance with UNHCR and the message that this agreement transmits around the world that the Club is on the side of the most disadvantaged.

One of the most emotional moments of the evening was when South Sudanese refugee and activist Mary Maker, shared her personal experience of growing up in a refugee camp in Kenya and the importance of education in transforming the lives of refugees.

A crisis of 100 million people

Both Joan Laporta and Filippo Grandi reminded the audience that the world is facing its one of the most serious humanitarian crises ever - with more than 100 million refugees and displaced people needed protection. This figure has been exacerbated by the war in Ukraine.

The alliance will also include UNHCR/ACNUR, UNHCR’s office in Spain, working with the FC Barcelona Foundation to implement projects in four countries that host refugee communities: Colombia, Malaysia, Turkey and Uganda.

Starting in the 2022-23 season, the project in Colombia will serve to reinforce safe and protective environments for children and youth from Venezuela and internally displaced persons affected by the armed conflict; in Malaysia, it hopes to improve the lives and wellbeing of Rohingya refugee children and adolescents who fled Myanmar; in Uganda, the focus is on a health, sport and environmental protection project for young people who have fled South Sudan and the Democratic Republic of Congo. Lastly in Izmir, Turkey, the project seeks to increase the protection, participation and inclusion of children and youth from different countries of origin, particularly Afghanistan, Iraq and Syria.

“The agreement with UNHCR is part of the priorities that FC Barcelona and its Foundation defined for this new stage of the Club, that I have the honour to preside: to focus on the fact that refugees and displaced people are people like us who have been forced to leave their homes and must be protected, especially children and young people in various countries around the world.

Barça's alliance with UNHCR gives meaning to one of Pau Casals' great sentences that today, with great emotion, we make our own: "Love in one's own country is natural. But why should we stop at the border? We are all leaves of the same tree and the tree is humanity."

“We need to work together to make sure that all these people, boys and girls, women and men are not left behind. That's why I am really excited that FC Barcelona and its Foundation have decided to partner with our organization, because it sends a very strong message of solidarity towards refugees, towards displaced people and because, using the power of sport, we are helping displaced children and refugees to rebuild their lives."