"More than a Club means more than just words" 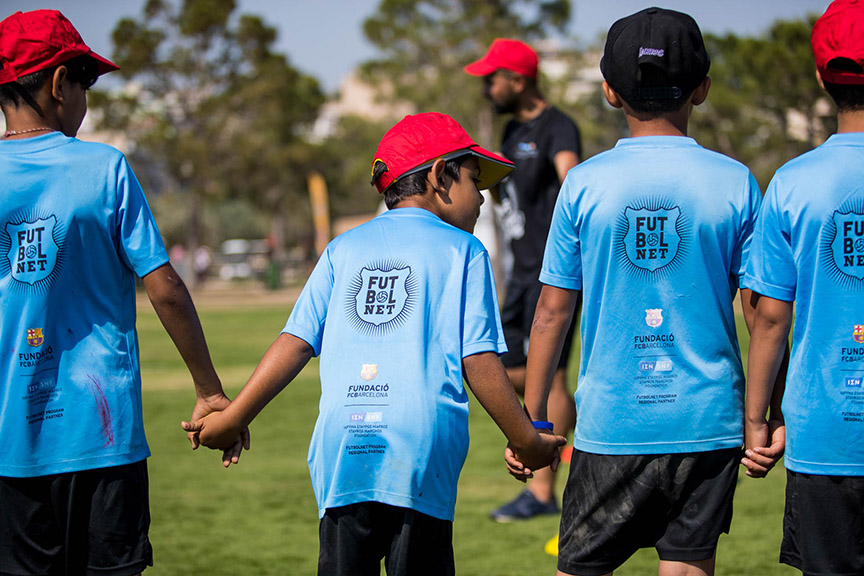 There are currently more than 68 million displaced people around the world, 22 million of whom are refugees. Half of those are children, who have had to leave their homes due to conflicts, violence and persecution. In their flight, they take on dangerous journeys, which in many cases end their lives. The current crisis of refugees and migrants in Europe is the worst since the Second World War. Such a huge humanitarian issue cannot go ignored. At the Barça Foundation we understand that we are all defined and built around our relationships with others. We are "more than a club" in more than just words. Our true existence is based on our values, but not just speaking about them, but also by putting them into practice.

Since the outbreak of the Syrian conflict in 2011, its neighbouring countries have taken in a progressively increasing number of refugees, now at almost 5.3 million. Young people are always the most vulnerable, and are denied the most basic of rights. Many of them have gone through traumatic experiences, and have lost their families, friends, role models and schools.

At the Barça Foundation we implement programmes in the field to offer psychosocial support and foster integration in host communities, especially in Greece, Italy and Lebanon. We work in association with the Stavros Niarchos Foundation and a consolidated team of professionals. The Foundation is having a positive impact on the emotional wellbeing of the affected boys and girls. It is thanks to these projects, and the FutbolNet methodology, that we have helped to make changes by using sport as the main agent. We often get the feeling that for refugee children the chance to work on values on the field of play is what keeps them away from fear and sorrow. Now they have their own place to speak and express themselves freely.

Charity work is an intrinsic part of the Barça philosophy. For the last three years, the Foundation has been developing this initiative in support of refugees. This year we will be using more than six million euros to support the refugees. These are not words. These are deeds. At the Barça Foundation we want to see a fairer world. But we cannot do that alone. Partnerships with civil society, businesses, other foundations and administrations are an essential part of achieving our goals. When we pool our experiences and resources with those of other institutions, we become an even more powerful instrument for development. And we don’t work alone. We support organisations like Open Arms, and the Red Cross.

I have always said that Barça is a way of life. I think the only way to achieve true success is by being actively involved in the quest for social justice. That’s our philosophy. We are part of a society that loves us and that looks up to us. We are in the fortunate position of being able to reach millions of people. And that is precisely why we are so committed to the refugee population, and especially young boys and girls. We must bring an end to prejudice and return to humanitarian values. Ignoring refugees would mean forgetting who we are. Because that is what Barça DNA is all about.