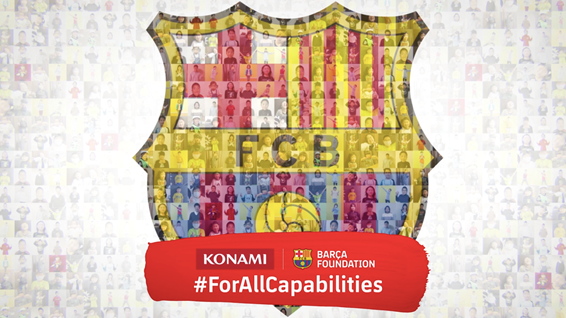 A video has been released on social media to celebrate the renewal of the collaboration between the two entities.

The FC Barcelona Foundation and KONAMI have renewed their collaboration agreement for the next two seasons, thereby reasserting their commitment to their joint project, For All Capabilities, which promotes the social inclusion of children with disabilities in sport.

This project, part of the FC Barcelona Foundation’s Diversity Program, is an initiative run by the entity in Japan in conjunction with a variety of other institutions and organisations to help create a more egalitarian and inclusive society. Teachers, educational teams from non-profit social organisations and Japanese sports coaches have, this season, been receiving training on how to implement the Foundation’s methodology.

The new agreement will enable the project to continue to run its program of on-site socio-educational and sports sessions based on the FC Barcelona Foundation’s own FutbolNet methodology and on-site and/or online methodological transfer seminars, as well as overseeing the activities of the relevant sports clubs and social organisations involved. An end-of-season event is also being planned for the children and collaborating entities participating in the program.

A Barça Foundation project in association with KONAMI in Japan

This project, launched in Japan in 2019 and carried out in association with the Japan Inclusive Football Federation (JIFF), works to promote the inclusion of children with functional diversity through the transfer of the Foundation's methodology. The program of activities run during the first season included the organisation of methodological seminars and specific seminars on the inclusion of children with disabilities, as well as an End-of-Season Festival in the city of Tokyo, which was attended by over 200 children with and without intellectual, visual and auditory disabilities.
During the pandemic, the project was adapted to a digital format, which ensured its continuity and which, with Konami’s support, will be maintained for the coming seasons.