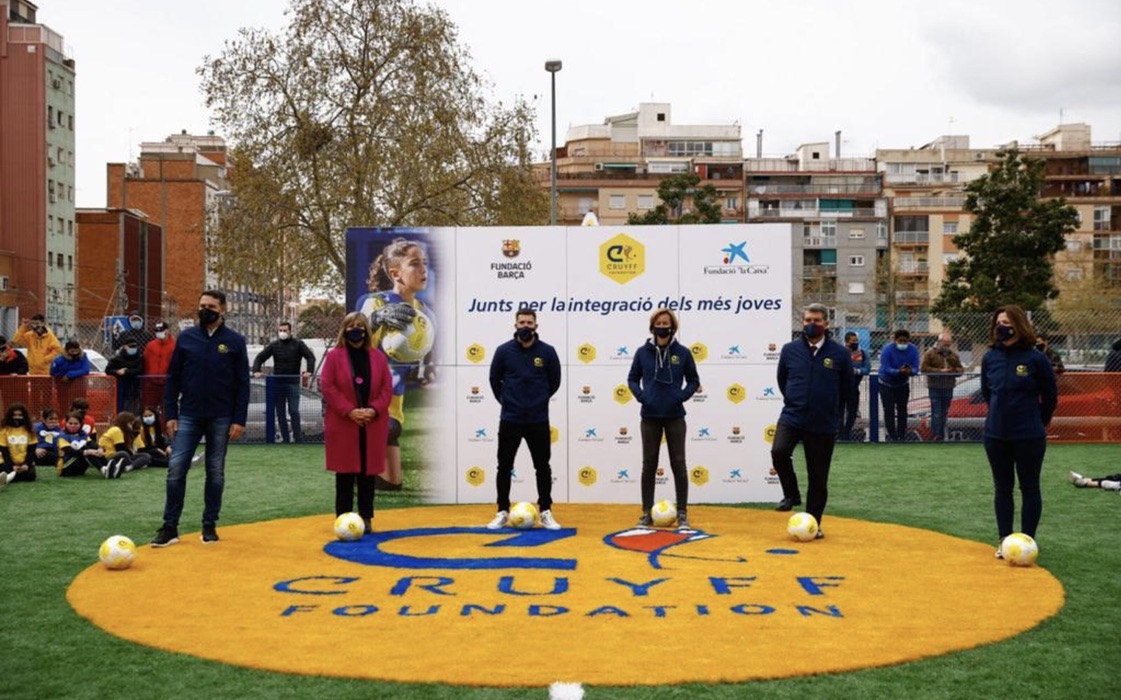 FC Barcelona player, Jordi Alba; president of FC Barcelona and the Barça Foundation, Joan Laporta; director of the Cruyff Foundation, Pati Roura; corporate director of Education and Marketing of the ”la Caixa” Foundation, Xavier Bertolín; and mayoress of Hospitalet de Llobregat, Núria Marín, inaugurated the Cruyff Court Jordi Alba on Friday, with the intention of promoting sport among children and young people in the city.

This initiative from the Cruyff Foundation is the result of an alliance with the Barça Foundation and the ”la Caixa” Banking Foundation for the construction, maintenance and revitalisation of a total of 15 ‘Cruyff Courts’ throughout Catalonia, a project in which priority is given to disadvantaged areas to promote social inclusion of especially vulnerable children and young people through sport. L’Hospitalet de Llobregat city council are also collaborating for the Cruyff Court Jordi Alba.

Cruyff Courts are small, open-air football fields that aim to promote sport and instill values such as responsibility, integration, teamwork and self-improvement, as well as prevent sedentary lifestyles and childhood obesity.

This Cruyff Court is part of the actions carried out by the L’Hospitalet City Council through their Comprehensive Urban Regeneration Plan of the Planes-Blocs Florida area, which aims to ensure the improvement of the quality of life and coexistence of the neighborhood through the promotion of integration, equity and social cohesion.

During school hours, the Cruyff Court Jordi Alba will host the daily sporting activity of the Balaguer and Pau Casals schools, which do not have adequate space for practicing sport. The rest of the time it will function as an open playground, and will be used by Esplai La Florida and Espai Jove Sidecar, among others.

This initiative also promotes two specific projects: The Cruyff Courts 6vs6, a tournament for boys and girls aged 10 to 12 in which all Cruyff Courts participate, and the Community Programme, which aims to allow young people from different neighborhoods to learn to organise their own tournament.

Jordi Alba, FC Barcelona Football Player
"I'm very proud to be here today. I went to school here and unfortunately we didn't have a pitch like this, so we played on the street and used stones for goalposts. I hope that the boys and girls in my neighborhood enjoy it and that they respect and care for it."
Joan Laporta, FC Barcelona and Barça Foundation President

"I couldn't have started in a better way than having my first act as president of Barça being accompanying one of our players, a beloved and charismatic player who gives everything, a 'street player' like Johann liked. I have a feeling of pride because whilst we have some very talented players, they are even better as people. This is the case with Jordi. I am delighted that this first act is the project of a person to whom I am deeply grateful; without Johann I would never have become president of Barça. He has always been helpful and I have only words of gratitude."

"I hope that now a new stage in the history of Barça has begun. If it turns out to be glorious, then it will be thanks to Johann, because we always take him into account when making decisions, in any field."

"I'm very happy that this new facility, which will be part of the Florida district's comprehensive plan, has been completed in a very short time. For me, it’s very exciting to see Jordi Alba, who was a boy who went to Balaguer school when they didn't have a playground, here to open what from today will be a place for children to enjoy."

“I want to thank Hospitalet city council and our partners La Caixa Foundation and Barça Foundation, and especially Joan Laporta -who is with us today- and Jordi Alba and his father for believing in the project and helping us a lot. I would like for us to remember Johann as well, because as he would say, we can't do this alone -we have to do it together."

Xavier Bertolín, “La Caixa” Foundation Corporate Director of Education and Marketing
“It is a source of pride for us to inaugurate this new facility and continue collaborating with the Cruyff Foundation and the Barça Foundation, with whom we have been working for almost 25 years. We are proud to continue opening spaces to promote access to sport for children and young people."
SHARE THIS NEWS