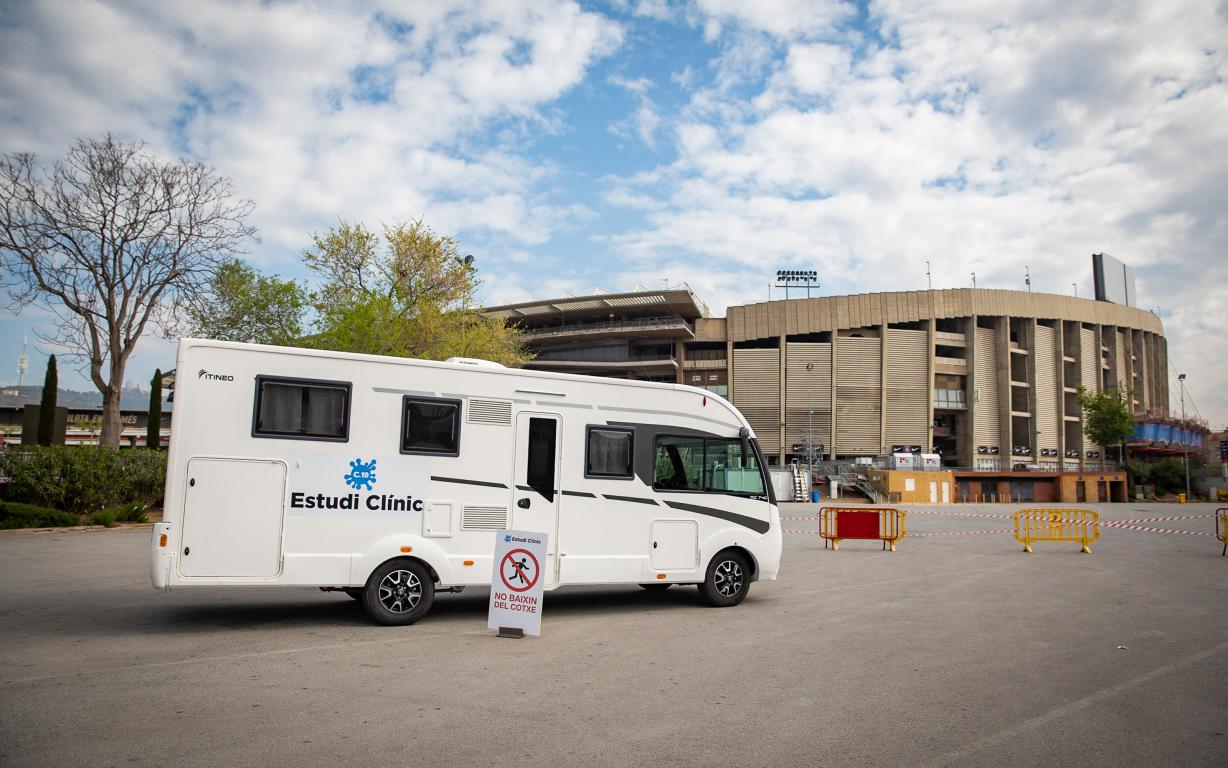 An important moment is upon the world, the biggest health, economic and social crisis in modern history and FC Barcelona has taken an exceptional decision, one that chimes with the answer that humanity requires at such a moment of great uncertainty: that everyone gives their all to counter the effect of this global pandemic which has paralysed the world. Conscious that Barça has a commitment to society that forms part of its identity as ‘more than a Club, the Board of Directors, the governing body chosen democratically by the members and presided over by Josep Maria Bartomeu, have approved the ceding of the title rights to Camp Nou for the season 2020-2021 to the Barça Foundation to raise money to invest in research projects being carried out in Catalonia and the rest of the world involved in the fight against the effects of COVID-19.

FC Barcelona and the Barça Foundation, of which the director responsible is the Club’s first vice president Jordi Cardoner Casaus, consider it a necessity that at this time of humanitarian crisis, the institution should use all its resources to fight against the coronavirus pandemic and its consequences. The Barça Foundation is celebrating its 25th anniversary this year and it reflects the Club’s determination to contribute to the creation of a fairer and more sustainable society, especially by improving the welfare of children at risk of social exclusion in Catalonia and around the world. At the moment the Foundation helps more than 1.6 million children to improve their lives via education, programmes for violence prevention and social inclusion. For these children, who have become indirect victims of this pandemia, confined to home for more than a month, to have a future it is vital to invest in research projects to find treatment to counter Covid-19 and that help alleviate economic and social effects.

As such, the Club, via the Foundation, has been carrying out a series of initiatives since to the start of the health emergency, working with institutions, businesses and other organisations. The Foundation has managed the recent initiatives in the battle against Covid-19 that have come about over the last few weeks such as the campaign to raise awareness by the Club, allowing facilities to be used and working with partners such as Tencent and Taiping to import health materials, adaptation of programmes so that children can stay in touch with teaching professionals, advice on the prevention of cyberbullying and organising visits by our sportsmen and women to sick children in hospital to name just a few examples.

For this reason, in the next few weeks, the Barça Foundation, through the Club's Commercial Area, will begin the process of finding a sponsor who wishes to acquire the title rights to Camp Nou for a season with the proceeds going to finance research projects and other projects involved in the battle against the effects of COVID-19, both at a local and international level. Barça are ceding those rights for a name to be put to Camp Nou for the very first time as the title rights are a commercial option that has never been exploited before and had been reserved for the Espai Barça, the transformative project for the Club’s facilities to become the best sporting complex in the world in the centre of a big city like Barcelona and that included the redevelopment of Camp Nou, the building of a new Palau Blaugrana, a Campus Barça and the Estadi Johan Cruyff, which is now being used at the Ciutat Esportiva. This ceding of the rights for a season is compatible with the future commercial use of the title rights for Camp Nou to finance the Espai Barça project, as approved by the members in a referendum celebrated in 2014.

Now, the Foundation will put out on to the market the title rights and it will use the money a sponsor brings in the service of a vital cause and one that benefits everyone. The income generated will create a fund that will be divided in the following way: a part will be destined for a project on COVID-19 driven by the sponsors themselves and the rest will be shared out amongst other projects that are being developed in parallel.

The historic commitment of ‘more than a club’

FC Barcelona is a club that has an ownership model not of a private business, shareholders or a State but one of more than 144,000 members, and above all it is a feeling that is channelled through sport and the love for the Club, represented by a crest, colours, a flag and a history. Throughout its history, FC Barcelona has forged an identity that separates it from other sporting entities, one that is based on being ‘more than a Club’ and that goes beyond taking part and trying to win trophies with its teams. Barça has a historic, irrefutable commitment to society, to Barcelona, the city that is its home and to Catalonia, the country it represents.

Barça is the sporting club with the greatest income in the world, the first to generate 1 billion dollars, but it is not untouched by the serious economic consequences caused by the global pandemic that has paralysed the sports industry around the world. Nevertheless, the Board of Directors who manage the Club consider that it a moment to be generous and supportive thinking in the collective with gestures like this, everybody contributing altruistically, humanity will overcome that pandemic which is touching everybody. For that reason, it has taken the decision to cede the commercial rights to the Foundation for the battle against Covid-19. The sponsorship agreement that is reached will have to be ratified by the Assembly of Members’ Representatives at the Club.

Statement by Jordi Cardoner, the first vice president of FC Barcelona and of the Barça Foundation

“We are very happy to be able to drive forward this initiative that offers something as emblematic as the name of our stadium, so that institutions, organisations, businesses who wise may associate themselves with it and as such, contribute to the fight against COVID-19, given that their investment will used to finance research projects on the illness and projects that are working to eradicate or lessen its effects. Right now, we can quantify the effects of this health crisis but what we do know is that it will require all our resources to defeat it and for that reason it is so important that we all together make a solid, firm commitment.”

“We are facing a global crisis without precedent in our modern history and we have to assume with courage and calm the responsibility that we have. For that reason, from both the Club and the Foundation, we consider it vital at this time of humanitarian crisis to use all the resources available at the organisation to fight against the coronavirus pandemic and its consequences. It forms part of our way of doing things and of being as an institution.”

“The cause, fighting against the coronavirus, is a global one. Being the top sporting entity on a world scale implies that we take on this challenge as fully as we can and if we can serve as inspiration for other organisations involved in the battle, perhaps we can create a wave of hope for millions of people around the world who are suffering due to this pandemic.”