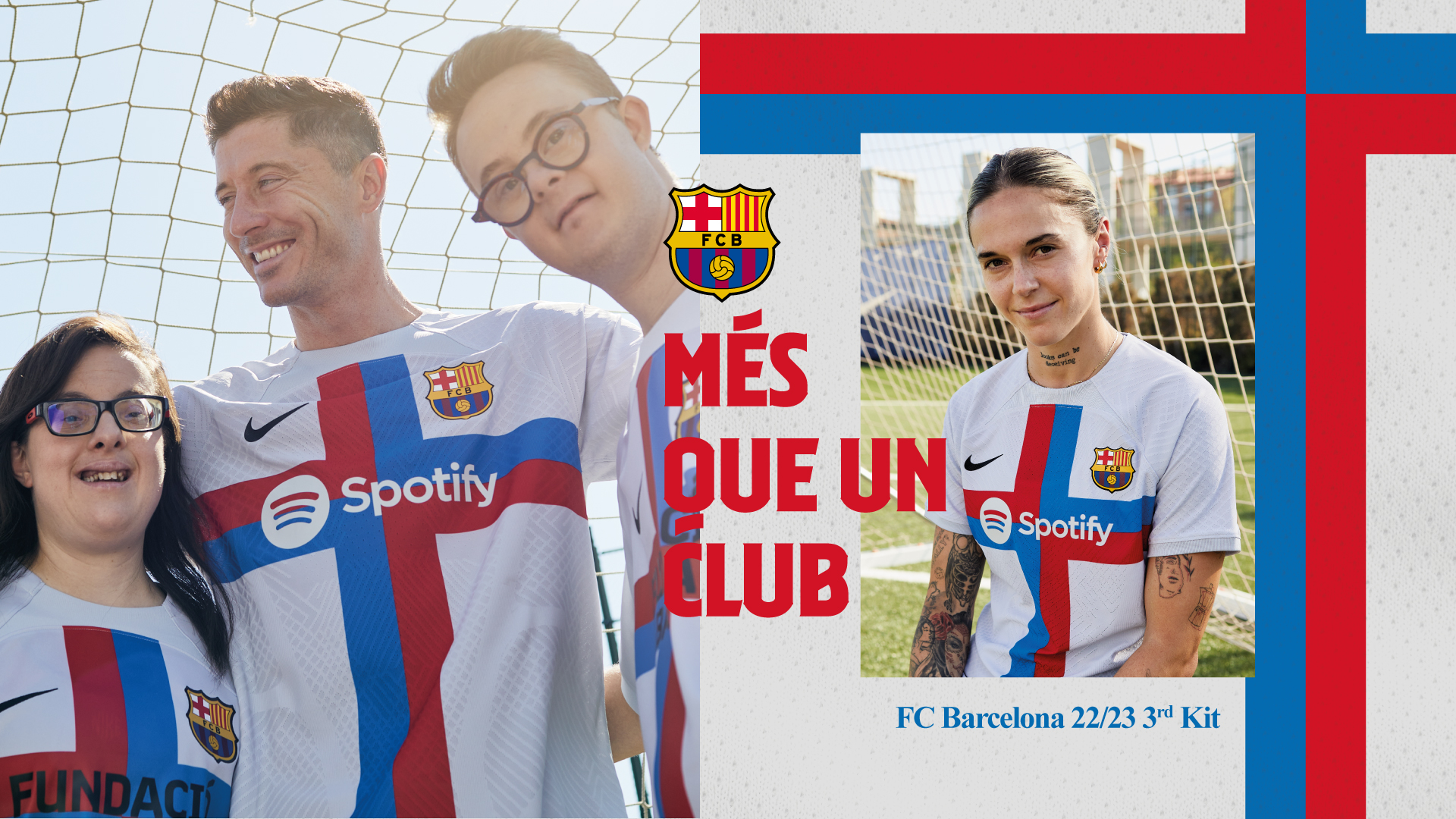 From this Wednesday, the third kit that the men's and women's senior football teams will be wearing this 2022/23 season goes on sale. It has a very different design to the usual strips, being inspired by the Creu de Sant Jordi -Cross of Sant Jordi- on the 30th anniversary of the presentation of the award of that name to the club. It also showcases Barça's commitment to social causes, diversity and inclusion, core values that underpin its motto of being 'more than a club'. For that reason, the players from the Barça Genuine Foundation team have been chosen to be the main protagonists, along with footballers from the men’s and women’s first teams, of the launch of the shirt that will be worn for the first time in tonight's friendly between Xavi Hernández's FC Barcelona and Pep Guardiola's Manchester City promoted by Juan Carlos Unzué to raise funds for the fight against ALS.

The third strip, which unlike last season will not be exclusive to European competitions but will be alternated with the first and second kits in the different tournaments, comes in a very different design that completely departs from the direction of previous uniforms. This one does not feature the usual stripes and instead includes the image of a large red and blue cross on the front of the shirt over a light grey base. This extremely atypical design represents a major departure from the traditional style of Barça strips.

Design commemorating the award of the Cross de Sant Jordi

The club's social commitments are also manifested in this strip through the prominent presence of the Cross of Sant Jordi (Saint George) in the design. 2022 marks the 30th anniversary of the awarding of the said Cross by the Government of Catalonia to FC Barcelona in recognition of its contributions to the betterment of society and its leading role in the promotion of sport, as well as its values in relation to sport, civic duty, and solidarity, which make it so unique in the sports world.

These values are also being reflected in the way that the strip is being officially presented. For the first time, it will not only be players from the men's and women's first teams who will be helping to unveil the new design, but also those of the Barça Genuine Foundation team made up of boys and girls with functional diversity who have been competing since last season in the statewide LaLiga Genuine Santander.

The club's commitment to social causes is precisely being demonstrated on occasion of the match in which the strip will be worn for the first time. Barça are playing Manchester City at 9.30pm CEST in a charity fundraiser in support of ALS. The third strip will be going on sale from the day of the match, Wednesday 24 August.

Fans will be able to enjoy early access until Sunday 28 at the Barça Stores in Camp Nou, Passeig de Gràcia, Canaletes, La Roca Village, Sagrada Familia and Barcelona airport T1 and T2, as well as online via the club's e-commerce outlets. After the 28th, the kit will also be available from all the usual points of sale.

The launch campaign features Barça Genuine Foundation players, namely Adrià Alonso, Jenifer Cabanillas, Marc Cutillas, Montse Durà, Manel Solà and Miquel Chavarria, alongside professional stars Robert Lewandowski, Pedri, Ansu Fati, Caroline Graham Hansen, Aitana Bonmatí, Ingrid Engen and Mapi León.
These names appear in the images of the presentation wearing the new kit. They might be different, but they are footballers just the same, and are just as much heroes and heroines who transmit the same sporting spirit and the same commitment both on and off the field of play.

Like the first and second strips, the third one also incorporates the logos of the club's new strategic partners. The middle of the cross features the Spotify logo in grey on the men's and women's shirts, while that of the LaLiga Genuine team bears the name of the Barça Foundation. There is also a black Nike swoosh and the FC Barcelona crest on the front, and on the lower part of the back, as with the other kits, there's the name of the United Nations Refugee Agency. The Catalan flag appears at the top, just below the collar. The players' names and numbers are also shown in black. The shorts and socks are in the same grey colour as the shirt.

Just like the first and second kits, the shirts and shorts that the players will be wearing, as well as all official replicas, are made with sustainability criteria in mind, being produced with a 100% recycled polyester fabric obtained from recycled plastic bottles.