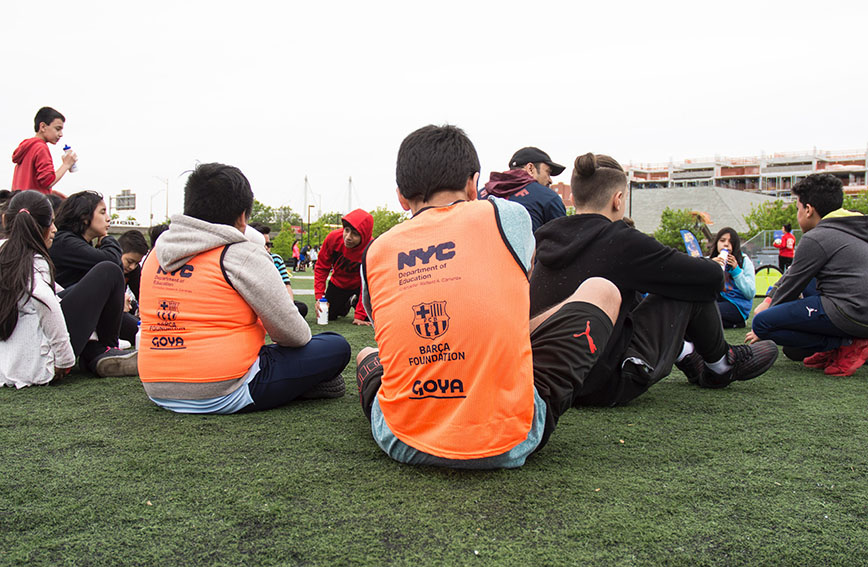 This is the first edition of the Foundation’s inclusion program featuring the ‘FutbolNet’ methodology in the United States and with the support of Goya Foods and the Department of Education.

This Friday, the Barça Foundation has organized the closing festival of the first edition of the social inclusion program involving 350 boys and girls from four public schools in the district of Queens, New York, which is supported by the city’s Department of Education (DOE) and the company Goya Foods.

It all happened on the sports grounds at Flushing Meadows Corona Park in the morning and brought together all of the children that have taken part in this first season of the Barça Foundation program using the same FutbolNet methodology being used at the moment in almost 53 different countries, and most especially in Catalonia, where the program was set up in 2011.

This is the first season-long edition of the scheme in the United States and has involved pupils from four public schools in Queens: IS 5 The Walter Crowley Intermediate School, IS 61 Leonardo da Vinci, Q277, Hunters Point Campus and The Riverview School. The latter is a special education school for children with mental disabilities.

There have been two sessions a week since November at each of these schools, and the centers have responded in a highly positive manner, as has the Department of Education and also the physical education teachers that have been giving the FutbolNet sessions after receiving special training from specialists from the Barça Foundation.

"Through this initiative, Goya Foods is showing its commitment to supporting and promoting the general wellbeing of our community, and especially youngsters. Soccer’s popularity is growing immensely in the United States. It is a multicultural sport that is watched and played by millions of people and families around the world. We view this program as a great opportunity to help the people through love and passion for sport, while also encouraging the importance of a healthy diet and exercise among our children and families”.

"FutbolNet keeps pupils active while developing emotional and social skills. I thank our partners for their commitment to providing out students with the tools to improve their quality of life both in and outside of school. We hope to consolidate the program and extend it next season because the results have been very good indeed".

Statement from Jordi Cardoner, vice-president of FC Barcelona and the Barça Foundation

"For the last nine months we have been observing a constant change in the general wellbeing and behavior of many of the pupils that have taken part in the program. They are now socializing very well together and we can see the boys and girls interacting with each other, showing respect and working as a team. That’s why we want to take this social inclusion program run by the Barça Foundation and using the FutbolNet methodology to many more schools in the country, as we are doing in so many countries of the world, and especially in Catalonia”.