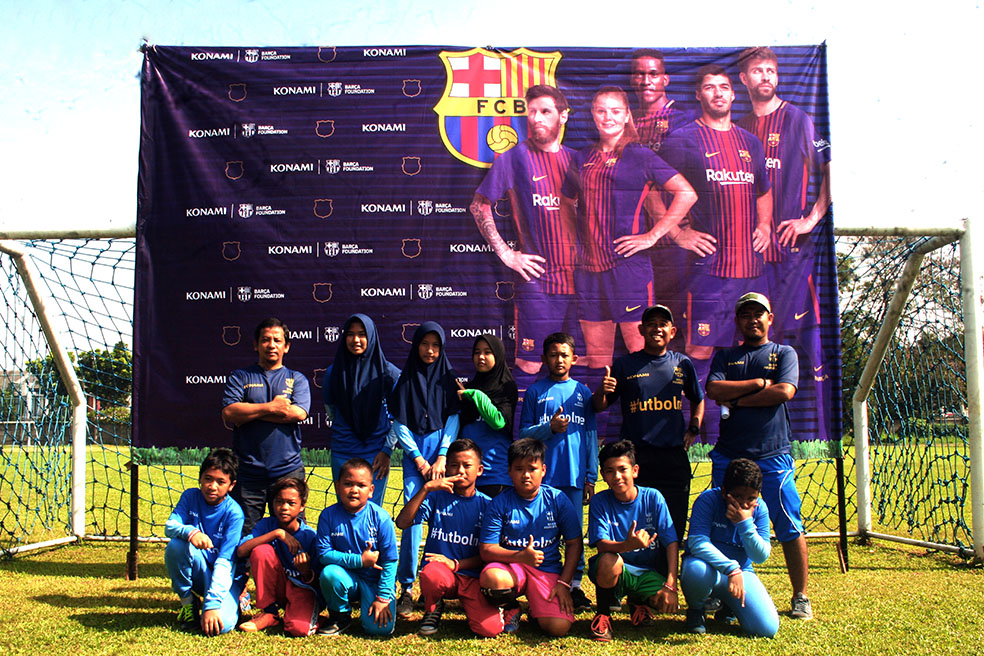 Last Sunday 25 February, Tangerang (Java, Indonesia) was the venue for the first KONAMI FutbolNet Festival involving 257 boys and girls from 10 to 14 years.

The Festival forms part of the Social Inclusion project that the Barça Foundation has been implementing since July 2017 in Indonesia thanks to KONAMI and in collaboration with local partner the ASA Foundation. These nine months have seen the programme reach eight thousand boys and girls from Pluit and Bogor, where the high levels of poverty and vulnerability prevent children from accessing adequate sanitation or a quality education.

The opening ceremony involved representatives of the different organisations that have made the project possible as well as the local authorities. Naoki Morita, General Manager of PES KONAMI, Lee Hawkins, Technical Advisor of the ASA Foundation and Guiomar Todó, Barça Foundation Manager of Fundraising and Campaigns all attended the festival.

As usual at these vents, the central activity consisted of different football matches implementing the FutbolNet methodology. There were also sports activities to put into intensive practice he values of the project and of FC Barcelona: humility, effort, ambition, respect and teamwork.

The Barça Foundation together with KONAMI and the ASA Foundation have been implementing FutbolNet in Indonesia since July 2017. The project has been set up in two places, the district of Pluit in Jakarta, and the rural township of Bogor, to the east of Java, for an eight-month period. Both places exemplify the high-risk situations suffered in different parts of the country, with high levels of poverty and a growing urban mass that is giving rise to many environmental, social, economic and demographic problems that are affecting the lives of children and young adults. The children only have very limited access to a school education, and due to the lack of resources they have no time for leisure activities or access to training programmes. That is why the Barça Foundation programme, with the support of KONAMI and implemented by the ASA Foundation, have offered the vulnerable children of Pluit and Bogor the chance to enjoy the social and sporting activities offered by FutbolNet to local schools and leisure centres, as well as supplying them with the necessary equipment.

FutbolNet in Indonesia is run in an inclusive and empowering environment to foster youth development through sport, thus improving health and encouraging gender equality. The project is also designed as a pedagogical tool to generate long-lasting benefits in terms of capacity-building, athletic and personal development, and physical and psychological health. To do so, spaces for meeting, dialogue and exchange are being provided to promote social cohesion and inclusion among target groups.

With this project, the Barça Foundation has been able to transmit the philosophy of being ‘More than a club’ in a country like Indonesia where Barça has millions of supporters.