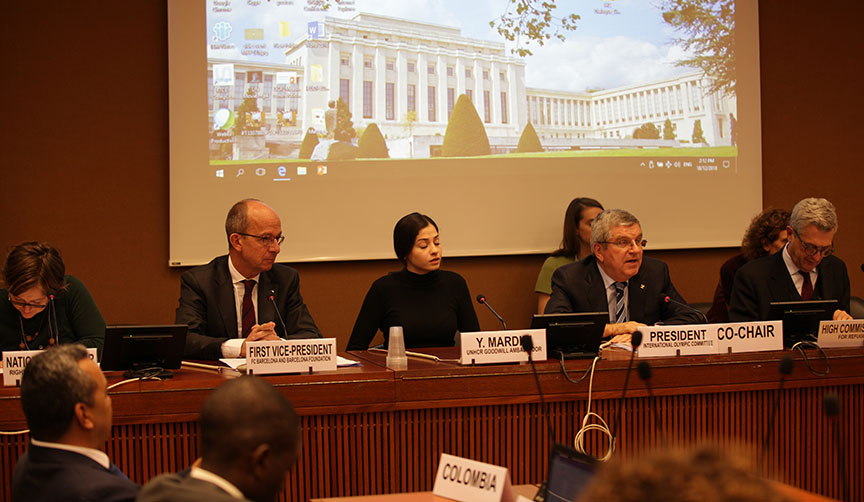 Jordi Cardoner, first vice-president of FC Barcelona and the Barça Foundation, along with various leaders of international sporting organisations & municipal organisations, plus personalities from the world of sport and from civil society,  met today in the United Nations High Commissioner for Refugees Dialogue event, which featured discussions on the challenges of the protection of refugees in Geneva. The various roles played by sport in achieving positive social results in refugee communities -especially in urban environments- was discussed.

Cardoner, explained that, in response to the commitment to the refugee population, and especially to children and young refugees, the Barça Foundation has set up a programme that uses the FutbolNet methodology as a tool to provide psychosocial support to them and favour their integration into the host communities -specifically in Greece, Italy and Lebanon. He also gave a presentation of the results of the programme from the most recent evaluation. Some of the conclusions mentioned were the increased confidence and self-esteem of the participants, the impact on the improvement of their attitudes, and how they have come to live together peacefully and feel that they are in a safer place.

A meeting in Geneva

Through practical examples, the different speakers talked about the positive role that sport plays in integrating children and young people traumatised by war and exclusion. They provided their views and made specific recommendations on how municipal authorities and the organisations that work with displaced communities through sport can collaborate more effectively to support  inclusion in urban environments.

Sport and games have been present amongst refugees since UNHCR began working with displaced communities. Sport is fun and often provides a much needed distraction for children. It can also provide displaced populations and the host community with a vital link and a shared experience. It can provide opportunities for personal development and support improved physical and psychosocial well-being, and help to knock down the barriers that may exist between displaced communities and those that shelter them.

The rest of the speakers in the roundtable were the national director of Right to Play,  Virginie Emery; Filippo Grandi from the Office of the United Nations High Commissioner for Refugees (UNHCR); Soham El Wardini, mayor of Dakar, Senegal;  Yusra Mardini, Olympic athlete and ambassador for the UNHCR; Laura Vanessa Pi, from the ‘Veni Juga’ project in Colombia, and Thomas Bach, president of the International Olympic Committee (IOC).

Finally, the session also provided a space for organisations and persons related to sport to offer their perspectives on the issues.