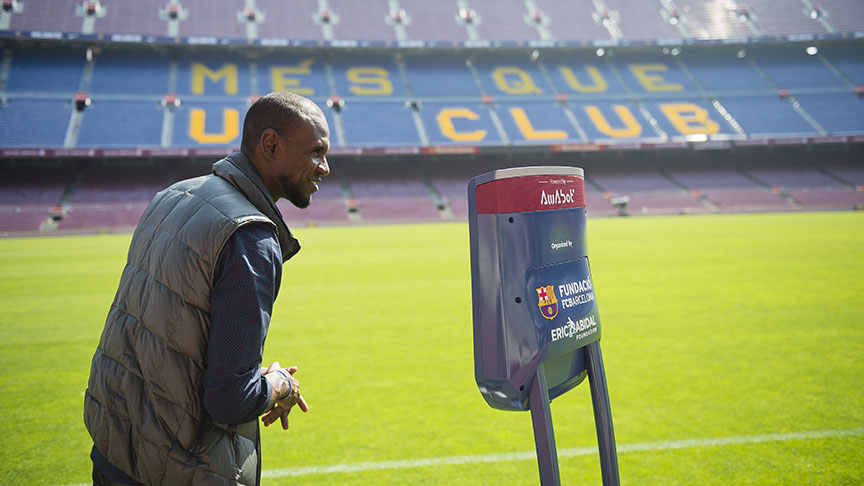 Barça Foundation participates through two social initiatives,namely the Robot Pol project and the campaign against cyberbullying

The Barça Foundation is continuing to support innovation and new technologies in compliance with its objectives and is exploring new methods to optimise its actions. So it couldn’t afford to miss out on the Mobile World Congress, which is being held in Barcelona from February 26 to March 1.

The Foundation is playing an active role at the benchmark event that brings together the elite of world technology, and is doing so through two of its charity projects: Case for Change and D-Lab.

Case for Change is a GSMA (Global System for Mobile Communications) project to promote the UN Sustainable Development Goals through technology. Specifically, this project has used a video of the Robot Pol programme set up in conjunction with the Eric Abidal Foundation. Robot Pol is a device that’s used so that boys and girls with illnesses so serious that they are unable to leave hospital can enjoy a Barça experience to raise their spirits.

The Case for Change scheme run by the Barça Foundation and Eric Abidal Foundation, along with similar programs from around the world, can be viewed at the #BetterFuture stand in Innovation City Hall 4 where it can be enjoyed in 360º, also in Yomo, in 4YFN, in Wrap Up Video, and at other conferences and stands at the congress.

The diverse experiences involving the robot include such activities as attending an FC Barcelona training session and getting to greet the players. It is scientifically proven that positive emotions can help to improve the health in such difficult circumstances and foster a more tolerant and persistent attitude to the frustrations that children suffering from serious illnesses must deal with.

The Barça Foundation is an ambassador for D-Lab, the event organised by the Mobile World Capital Barcelona on the use of technologies as a means for social improvement, specifically with regard to the issue of cyberbullying.

D-Lab encourages participants to seek innovative digital and mobile based solutions, focuses and projects for prevention, awareness raising, support, encouragement of the reporting of incidents and help for the perpetrators to understand the effects of their behaviour.

The Barça Foundation has been involved in defining the challenge as part of the jury that has rewarded initiatives in the form of prizes.

Cyberbullying is repeated verbal and psychological harassment on electronic and digital media. Intention and repetition are always factors. Perpetrators deliberately seek to cause damage in a situation where there is an imbalance of power between the victims and offenders. Attackers feel protected by a sense of impunity, anonymity and lack of liability, for they are able to easily contact an infinite audience, without limits in terms of time or space.

The Barça Foundation is firmly committed to the struggle against both bullying and cyberbullying and has put together its own programme to help tackle the issue. Its actions have included the organisation of a symposium in the Auditori 1899 and a pilot project at schools to create a methodology to prevent bullying. That’s why it wanted to get involved in the Mobile World Capital Barcelona challenge, so as to continue its good work combatting such harassment.