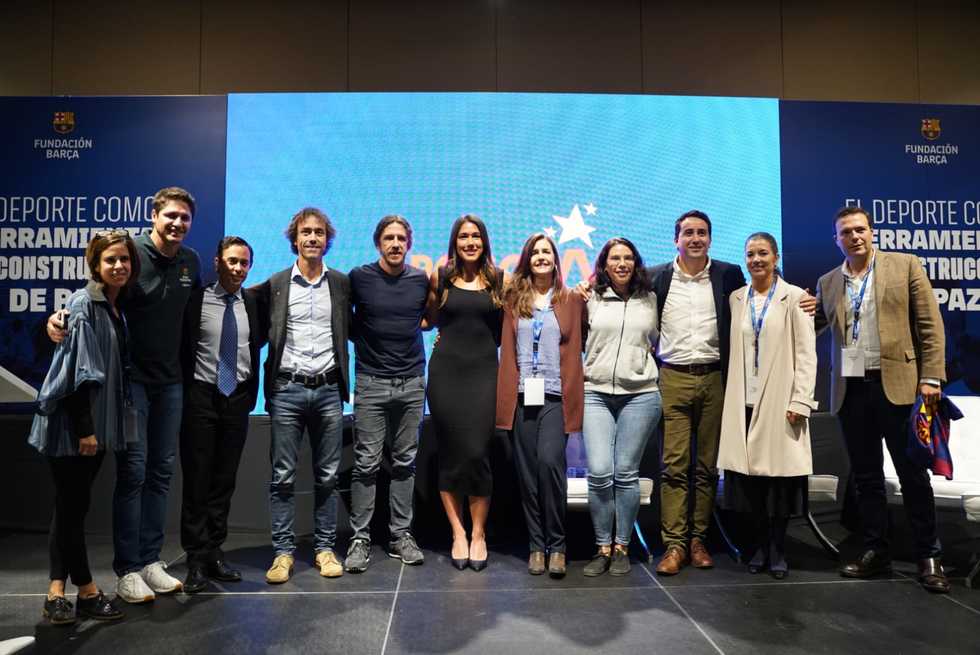 The “Sport as an instrument for peacebuilding” forum held by the Barça Foundation in partnership with the Bogota City Hall and Chamber of Commerce was attended by several sporting and political authorities, including Carles Puyol and José Edmilson.

The forum on “Sport as an instrument for peacebuilding” was held today, bringing together experiences and voices that integrate sport into social responsibility and work to prevent violence and crime.

For more than three years, the Foundation has concentrated its efforts on four defined goals within the Youth Violence Prevention Program, whose actions are based on coordination with other public and private parties:

According to María Vallés, Global Director of the Barça Foundation, “the results of the work done by this organization and other actors have generated a positive impact on a total of 14,710 beneficiaries in various municipalities of Colombia. I would like to highlight the system we have in Colombia, in which we work with various parties, such as the administration, private companies and social entities”.

During the forum, held in conjunction Bogota City Hall and Chamber of Commerce, Nicolás Uribe, president of the chamber, stressed the importance of such partnerships and their impact in this particular case. “In Bogota, we developed the ‘En la Juega’ program with the City Hall and the Barça Foundation, which had an impact in five cities to improve business environments and offer young people a different kind of city: one that is more humane and more dignified.”

The agenda for the event included speeches by World Cup winning Carles Puyol and José Edmilson, who talked about the commitment that sport needs to establish in order to transform society in terms of such issues such as violence, inequality and sustainability.

The Bogota experience: a successful case

The Barça Foundation’s work in the capital of the country began in early 2019 with the inauguration of the FutbolNet project, which seeks to generate opportunities for the inclusion of youngsters from San Cristóbal, Ciudad Bolívar, Usme, Engativá and Bosa, through social inclusion, violence prevention and access to education through this program run in local parks.

This cooperation between the Foundation, the District and the Chamber of Commerce has positively impacted more than 3,000 young people in Bogota. In addition, the Undersecretary of Security and Coexistence, Luz Janeth Forero, spoke about the efforts that must be made to make the capital a place where sport generates peace: “Claudia López’s council is committed to transforming the lives of our children and adolescents, getting them away from violence, delinquency, insecurity and crime. Such alliances with the Chamber of Commerce and the Barça Foundation have inspired us to continue working with a focus on our children using such an instrument as sport”.

Since arriving in Colombia in 2016, the programs run by the Barça Foundation have impacted more than 14,000 young people in Bogota and Valle del Cauca, using sport to keep them from crime and violence.

The results of the FutbolNet program, which involve the Foundation working with the public sector, have led to a demonstrable reduction in aggressive behaviours and increased empathy and dialogue between its participants.

Statement by Xavier Aguilar, patron of the Barça Foundation:

“Helping to achieve dialogue, respect, coexistence and peace are part of our social DNA. These are the things that make us more than a club.”