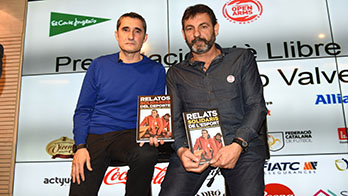 Ernesto Valverde, the first team coach of FC Barcelona, and Òscar Camps, the founder of Proactiva Open Arms, were the main attractions at the launch of the 14th edition of Relats Solidaris de l’esport, a book of sports tales put together by a group of more than 50 reporters from our country.

The proceeds from this charity publication are donated to a chosen charity, which this year is Proactiva Open Arms, an organisation that saves people from drowning in the Mediterranean Sea.

The Barça coach said that “those of us who live in the football world are used to setting an example for many people, and to many children; people view us as heroes because we play in championships and try to win finals. And one cannot help thinking that heroes and role models are people like Òscar Camps and the people that work with Open Arms, who risk their lives every day so that others can survive. Sometimes the football part is taken too far and the social part not far enough”.

Òscar Camps thanked Relats Solidaris for choosing Proactiva Open Arms as the beneficiary this year: “we were a small, simple and popular response, and for 26 months we have been turning that around and are fighting for the dignity of some people and for everyone’s rights." This is a time when many people’s lives and human rights are at risk, and he used the occasion to point out that his flagship is currently unjustly detained in Catania by the Italian authorities: “we are in the middle of the sea, in international waters, trying to save people from drowning, whose lives are in danger, if the media and politicians then label us then that’s not our problem, but international maritime law calls them shipwrecks or endangered lives at high sea and we cannot be accused or judged for what we do”.

Last November, the Barça Foundation and Proactiva Open Arms signed a collaboration agreement that initially involved an awareness campaign addressed at children about the troubles of refugees through sessions held on board the boat Astral in different ports on the Catalan coast, and afterwards in Palma de Mallorca. This agreement will lead to further actions over the coming months.