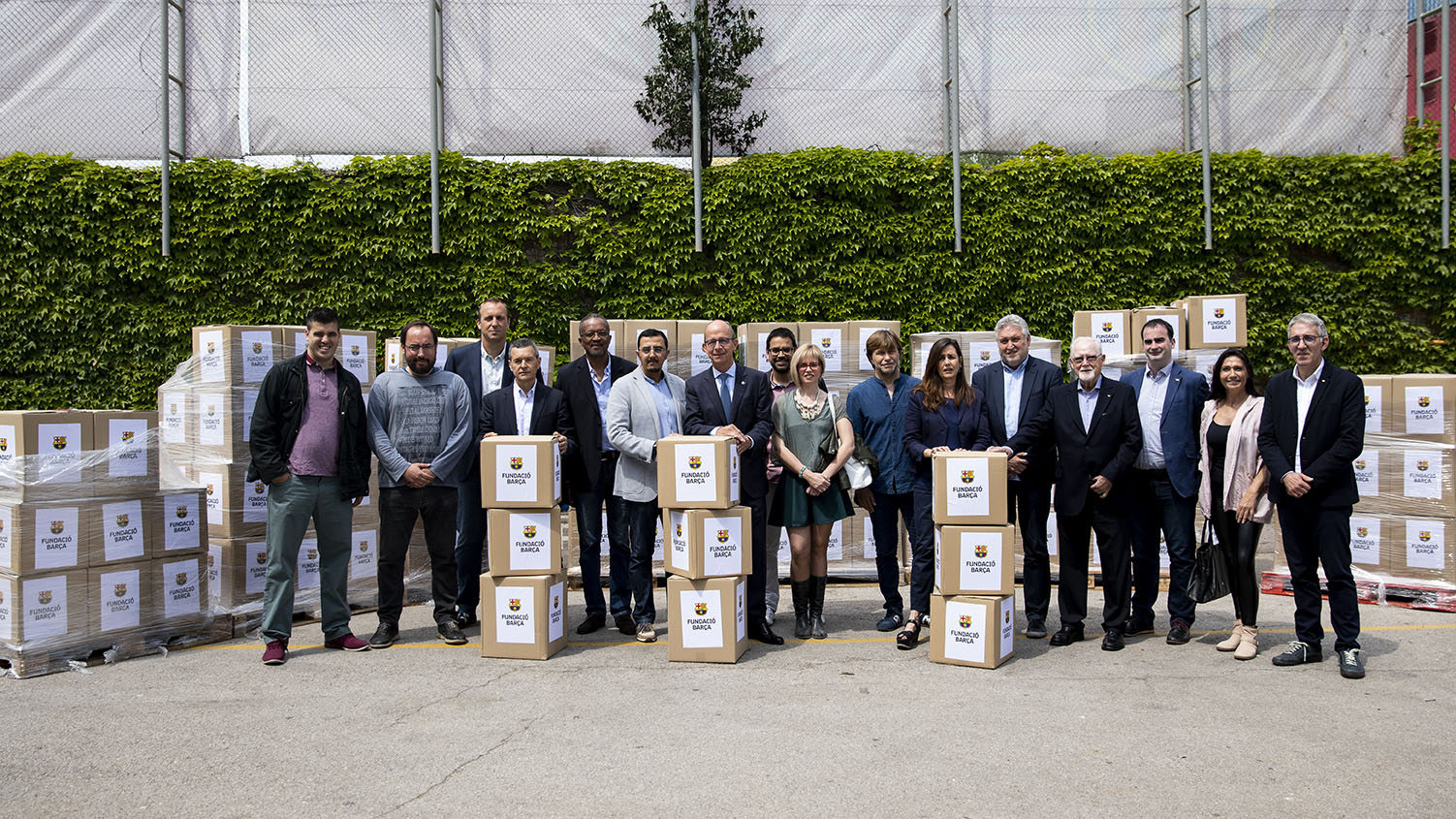 First vice-president of the club and Foundation, Jordi Cardoner, presents the material for children at risk of exclusion, including 1,800 minor refugees

The Barça Foundation has delivered 15,000 items of club clothing and merchandise as part of its donations program for more than 13,000 child beneficiaries, 1,800 of whom are young refugees in Catalonia. It has all been achieved thanks to the organisations working in support of these groups: Red Cross, ISOM, Cooperativa GEDI, IBN Battuta and GENTIS. The other beneficiaries being supported by the RED CROSS are among the most vulnerable in the country.

The presentation was made at the Camp Nou at an event attended by the first vice-president of FC Barcelona and the Foundation, Jordi Cardoner, the president of the Red Cross in Catalonia, Antoni Aguilera, Mr Hassan Bolif, Coordinator of the Ibn Battuta Foundation, Mr Josep Yuste coordinator o DAR, Mr Roger Raventós Carmona, Member of the Centre Management Team, and Mr Carles Martínez Collado, Coordinator of GENTIS in Catalonia.

The donations of sports materials (shorts, shirts, socks, jackets, etc.), and merchandising with the Barça logo, was presented to charity organisations that work with vulnerable people. There were also donations of match tickets, especially to see Barça B, and to enjoy the Camp Nou Experience.

It was all made possible thanks to the collaboration of five of the professional teams at FC Barcelona; women’s football, basketball, handball, futsal and roller hockey.

According to the Direcció General d’Atenció a la Infància i l’Adolescència (DGAIA), in 2016, 684 foreign minors without family references (MENA) arrived in Catalonia, almost double the number for the year before. But the number last year was even higher, more than twice as many in fact, as many as 1,334. And the figures are still on the rise in 2018, with the DGAIA setting up a plan to improve the reception and integration of these children. In response to the demand from its own participants, the DGAIA and the Consorci d’Educació de Serveis Socials de Barcelona, the Barça Foundation is offering a programme based on the FutbolNet methodology, a resource that uses sport to foster emotional wellbeing and social inclusion among young people.

The figures, alarming enough as they are, are made even worse by the way in which the incoming foreigners are exposed to all kinds of dangers and violation of their rights. Unaccompanied children are considered to be the most highly at-risk group. The causes of this significant rise in the numbers of children arriving in Catalonia are not only the financial hardship and lack of future prospects in their home countries, but also the situations of crisis and conflict in so many parts of the world. They mainly arrive on the Iberian Peninsula from Morocco (although many arrivals are now coming in via Italy) and on the back of traumatic experiences and all kinds of dangers during their journeys.

As claimed by the annual report on Children’s Rights of the Síndic de Greuges de Catalunya, in November 2017 a collapse was detected in the system for child protection and over-occupation of host centres, where the facilities are deemed vastly insufficient to cater adequately for the basic needs.

With this in mind, the Barça Foundation is focusing its efforts on contributing to the children’s wellbeing by generating emotionally stimulating experiences and opportunities, with a special focus on the most at-risk groups, including the boys and girls with the highest indicators of vulnerability (in situations of poverty, sickness, lack of protection, etc…).