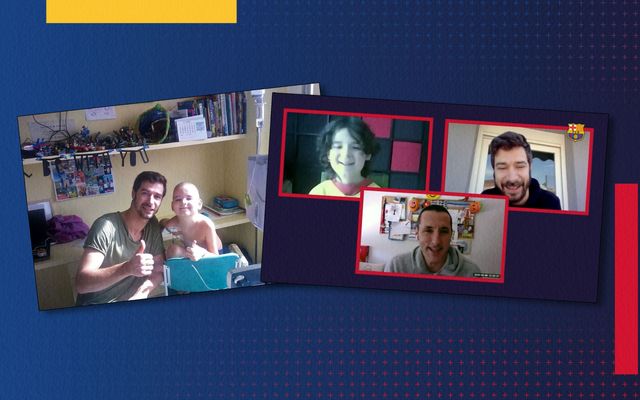 Barça goalkeepers receive recommendations from Bernat, who has been fighting leukaemia for two years: “you have to be positive and think about what you’ll do when lockdown ends”

Roller hockey stars Sergi Fernández and Aitor Egurrola have not played at the Palau Blaugrana for six weeks, but how can a month and half compare to two years fighting against a serious illness? People who are quarantined but are perfectly healthy “are lucky they aren’t stuck in a hospital ward or at home for a year and a half” says Bernat to the two Barça goalies in a virtual meeting arranged by the Barça Foundation in association with Hospital Sant Joan de Déu.

Bernat was a youth goalie at Vilanova until he had to leave them in 2017, when he was diagnosed with leukaemia at the age of seven, and the ward at Sant Joan de Déu became his new home, away from friends and family in a kind of confinement that the rest of the world is now enduring as well. Now in the final stage of his treatment, he says “you have to stay positive. You have to think about what you’ll do when this is all over and keep talking to the people you love.”

The meeting formed part of the Barça Foundation’s Paediatric Wellbeing Programme, which has been adapted to a new format due to the quarantine caused by the Covid-19 crisis.

The idea is to show how children cope with being confined and to tell their Barça heroes all about it, their effort and bravery in the face of such serious illnesses and having to spend long stays in hospital  thus setting an example for others to follow.

Thanks to contacts made by Laia and Laura, Bernat’s coaches, Sergi Fernández was able to meet the little goalkeeper. The Barça star is one of his heroes, and he decided to pay a surprise visit to the hospital to give him a shirt. “He went crazy” said his mother Anna, a Barça club member.

From then on, a close bond developed between Bernat and ‘Xenxo’ Fernández, who the young boy always watched in games from his hospital bed. He was also able to see how the Penya Sang Culé was unveiled a banner and sung “We are all Bernat” at a game in the 2017/18 season against Follonica. “The hockey world mobilised to support Bernat” says his mother. “Sports’ values are not just about winning, but also about support for people in difficult situations.”

After months of fighting, Bernat and his older brother Magí visited Sergi Fernández at a training session and even got to go in goal to save shots from Pablo Álvarez! And they also got to see Barça v Reus, where the team celebrated the OK Liga 2019 title late last season.

With his final chemotherapy completed last December, Bernat ois bravely soldiering on and has even been able to start skating again. The state of emergency means he is back confined to his home, isolated and following orders. A lesson in life, but one that he knows all about already.