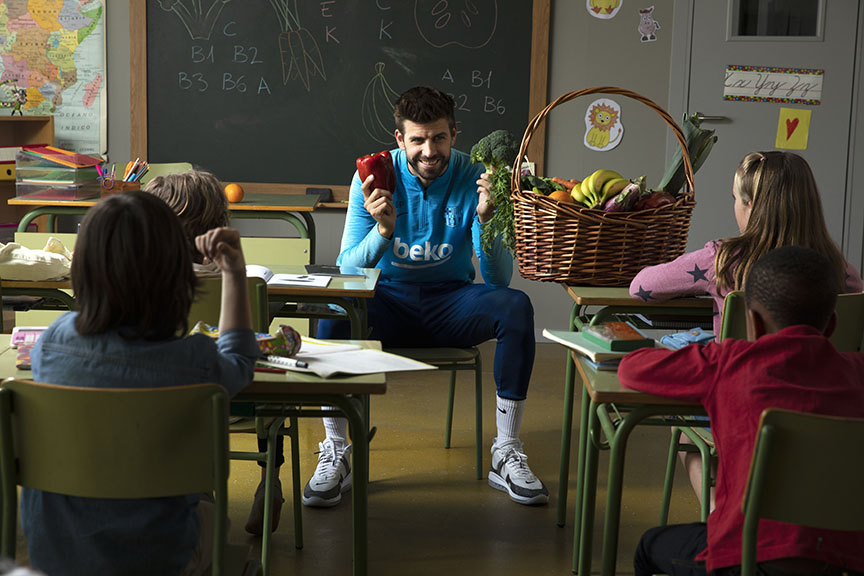 Study by Beko, in association with FC Barcelona, the Barça Foundation and UNICEF analyses the influence of footballers in the fight against child obesity

The influence of footballing heroes on children may help to solve major social problems such as child obesity, one of the biggest issues threatening modern societies around the world.

Proof of this comes in the form of a study conducted by the leading appliance brand in Europe Beko, in association with FC Barcelona, the Barça Foundation and UNICEF, which concludes that 80% of children eat more healthily if they know that their football hero has a healthy diet.

The study of 13,500 children aged 6 to 10 years in 18 countries analysed the major shortcomings in terms of the knowledge children have of healthy eating habits and sport, specifically football. The study forms part of the ‘Eat Like a Pro’ campaign, for which Barça star Gerard Piqué is its global ambassador.

Another interesting conclusion of the survey is the possibility of children changing their dietary habits. When they are asked if they would prefer to eat unhealthy food rather than healthy food if given the choice, 50% say no, 19% say they don’t mind and 31% take the unhealthy option.

Only one out of every five children knows that they should eat a recommended five items of fruit or vegetables a day. 72% of respondents know how many players there are in a football team, but just 21% gave the correct answer when asked what kind of daily intake of fruit and vegetable is considered a balanced diet. Compared by countries, French children produced the best results, with correct answers in 78% of cases, while those from the United Kingdom were second with 68%. That figure is much higher than the mere 16% who answered correctly in the United States and Germany, the 13% in Uruguay, 11% in Brazil, 10% in Thailand, 9% in Russia, and just 3% in China. Spain is somewhere in the middle, scoring 29%.

49% of children revealed that they speak more about football with their friends and families than they do about healthy eating.

Raising awareness of the importance of a good diet

The goal of the ‘Eat Like a Pro’ campaign run by Beko, FC Barcelona, the Barça Foundation and UNICEF, is to teach children about the importance of healthy eating, encouraging them to imitate the healthy lifestyles of their sports heroes.

Gerard Piqué, the programme’s ambassador, showed his support by meeting a group of boys and girls and speaking to them about the importance of eating properly. “When I was young, I wasn’t really interested in healthy eating, I only cared about football, but that all changed when I joined Barça and started to learn with the team nutritionists. It’s fantastic to see the passion for the beautiful game among children around the world, and to know my teammates and I are inspiring them is fantastic. We have an important role to inspire children to eat healthily, and I’m very happy to be able to do that through the Beko ‘Eat Like A Pro’ campaign”, he admits.

Roland Kupka, Senior Advisor for Nutrition at UNICEF global, adds that “UNICEF is concerned about the increasing rates of overweight and obesity in children worldwide. Promoting eating among children to reverse this worrisome trend is of paramount importance. Our partnership with Beko and FC Barcelona is part of UNICEF’s strategy to make healthy eating and active lifestyles the norm among children and adolescents, everywhere.”

Zeynep Yalim Uzun, Chief Marketing Officer at Beko commented: “Through our partnerships with FC Barcelona, The Barça Foundation and UNICEF we have developed a campaign that tackles a serious global issue, and one we felt we could make a difference to. The findings of this study confirm the job we still have to do to help prevent childhood obesity, but they show that ‘Eat Like A Pro’ can play a key role in helping families and inspiring children around the world to lead healthier lives.”