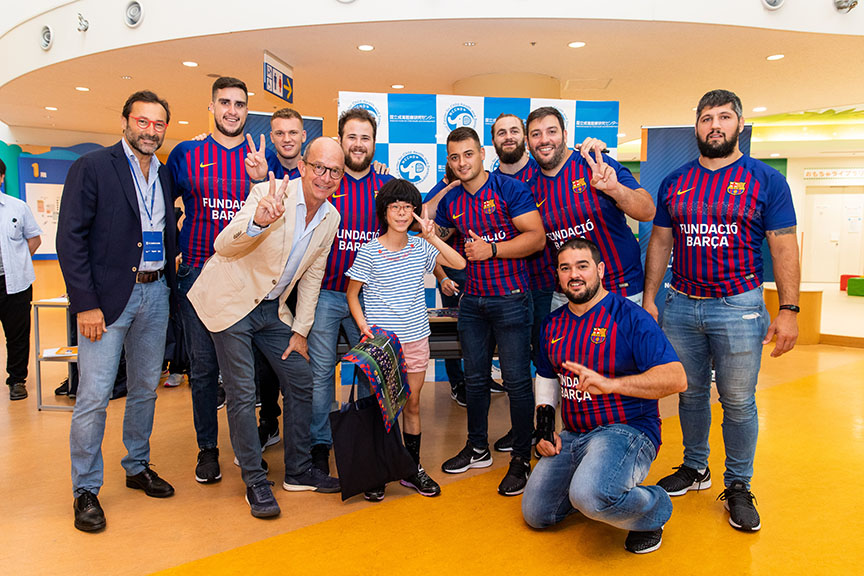 The first visit by the Barça rugby team to Japan has brought with it some emotional moments, especially when the players visited the paediatric ward at the Hospital National Center for Child Health and Development, one of the leading medical institutions in the country.

The players were able to spend some time with children who are going through a difficult stage of their lives, and posed for pictures with the boys and girls with their families and delivered plenty of gifts. They also presented the hospital with a commemorative shirt.
The professionals working at the centre were highly appreciative of the gesture, as explained by Hitoshi Kato, executive director of NCCHD: “We are very grateful to Barça and its Foundation for doing this. We are not used to these kinds of activities and view it as very positive for the children.”

For the players it was also a wonderful chance to boost the emotional welfare of seriously sick children.

The Barça Foundation's commitment to seriously ill children is shaped by the Pediatric Emotional Wellbeing program, which is carried out at the six leading paediatric hospitals in Catalonia and aims to foster the emotional well-being of children with serious illnesses by reinforcing positive emotions. The programme includes visits by FC Barcelona's professional athletes, as well as the "Robot Pol" project, a connected robot that allows children to go on virtual visits to the stadium from their hospital wards.

Before the visit, the team coached by Sergi Guerrero attended their final training session on the grounds of the Waseda University Club, and which the club wishes to thank for its help and hospitality.

After the visit, the players went directly to the Saitama Stadium to watch the match between FC Barcelona and Chelsea. Barça Rugby will travel to Kobe tomorrow for the second part of their tour.