Barça joins the tributes and acts of remembrance for the victims of the Barcelona and Cambrils attacks, a year on from the tragedy 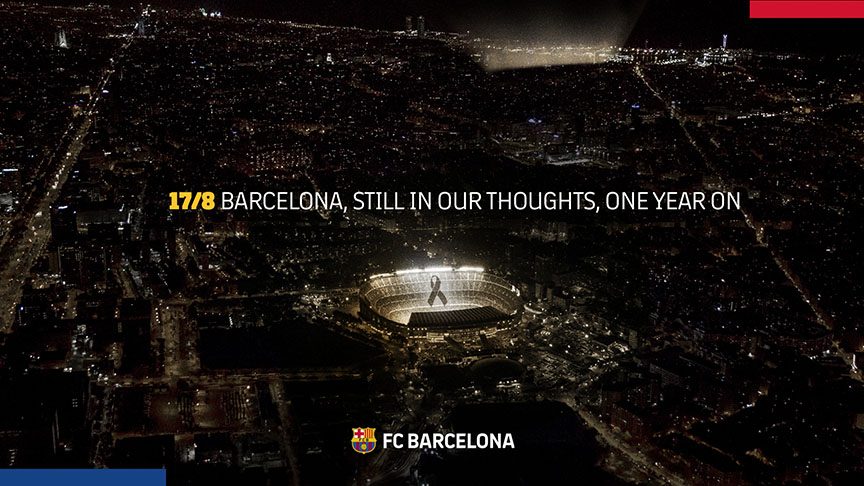 The Club, as a tribute to the victims, displays a shirt with ‘Barcelona’ printed on the back at the Museum and the Club shops on Passeig de Gràcia and at the Camp Nou

A year on from the terrorist attacks on la Rambla, in the heart of Barcelona, and Cambrils, FC Barcelona has joined the voices supporting, commemorating, and remembering the victims and their families and friends.

The blaugrana players wore ‘Barcelona’ on the back of their shirts instead of their names in the first league match of the 2017/18 season. This was the most visible step the Club took to remember the victims, their family and friends, and the citizens of and visitors to Barcelona and Cambrils. The Club also wants to recognise all those anonymous heroes: the volunteers, the medical professionals, the Mossos d’Esquadra, the Guardia Urbana, the local police, the state’s security forces, and all those who displayed their professionalism, humanity, solidarity and values in the aftermath of the tragedy.

On the first anniversary of the attack, ‘Barcelona’ will be printed on the back of the blaugrana shirt and displayed at the Club’s Museum, and stores on both Passeig de Gràcia, very near the scene of the attack, and the Camp Nou.

The Director Silvio Elías will represent the Club at the commemorative event BARCELONA, CITY OF PEACE at Plaça Catalunya on Friday 17 August. An event in memory of and solidarity with the victims of the terrorist attack.