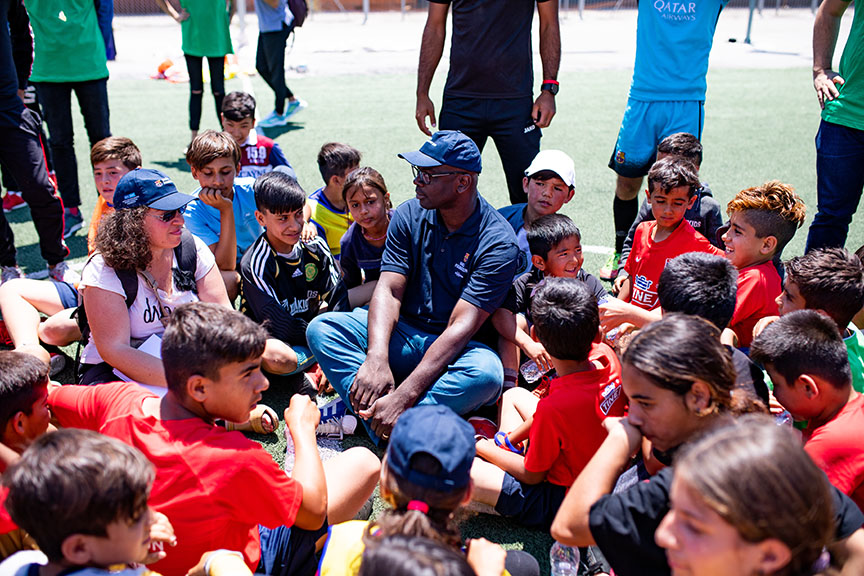 This year, the organisation has launched a support program for unaccompanied minors in Catalonia with more than 400 beneficiaries

More than 24,000 children have participated in the programs that the Barça Foundation set up two years ago in Greece, Lebanon and Italy, and more recently with more than 400 unaccompanied minors in Catalonia, who have attended in the activities promoted by the Foundation in collaboration with the General Directorate of Care for Children and Adolescents (DGIA) and various other entities.

The goal of this programme is to improve the emotional wellbeing of refugee boys and girls, and to encourage their integration with children and young people of other nationalities and ethnicities as well as with the local community. These programmes reduce aggressive behaviour, and improve interpersonal relationships, according to some of the conclusions of a report that assessed the programme late last year.

Using FutbolNet, the methodology designed by the Barça Foundation, the idea is to strengthen and provide tools to children to help prevent and resolve conflicts and foster social inclusion and integration. The sports and recreation setting provides a platform to normalise the lives of children who are living in an exceptional situation. It also supports physical and mental health, helps mitigate distress and promotes integration and social relationships for better emotional wellbeing.

The Barça Foundation, with the support of the Stavros Niarchos Foundation, has been running this programme since June 2017.

According to data from the Department of Labour, Social Affairs and Families, in 2018 alone Catalonia received 3,659 young immigrants without adult references. Between January and May of this year, 945 children and young migrants arrived in Catalonia alone, over 200 more than last year for the same months. Currently, more than 4,100 young people with no family references are part of the protection system.

The vast majority of these unaccompanied children are boys (97.3%) of between 16 and 17 years of age (66.7%). In terms of country of origin, most of them are from Morocco (80.1%) and, to a lesser extent, from Sub-Saharan Africa (14.8%). To deal with this situation, since June 2017 the Government has been running more than 170 centres created exclusively to help these youngsters, with a total of more than 2,700 places.

To further assist with the problem, the Barça Foundation, given its experience both in Catalonia and in other contexts as part of its refugee programme, has made the FutbolNet methodology available to 476 young people, which offers beneficiaries socio-educational and emotional support, has a direct effect on their integration and settlement in the territory, improves their emotional wellbeing and the prevention of risk behaviours (crime, substance consumption, etc.) and helps to de-stigmatise their plight. The programme was set up last year in coordination with various entities including the General Directorate for Care of Children and Adolescents (DGAIA) belonging to the Government of Catalonia’s Department of Labour, Social Affairs and Family and the Social Services Consortium.

One of the most serious humanitarian crises of our time

According to UNHCR, there are currently more than 70.8 million displaced persons and refugees who have been forced to flee their homes due to wars and conflicts, and half of them are minors. The Syrian war has resulted in one of the worst humanitarian crises of our time, with 6.3 million people forced to leave their country. At least one million Syrian refugees have sought safety and shelter in Lebanon, a country of 4.4 million. The Bekaa Valley region, close to the Syrian border, is currently housing 350,000 refugees on various informal camps. Other crises, such as those in South Sudan and Afghanistan, have also forced millions of people to flee. Many families have sought refuge in Europe, and the Mediterranean has been the scene of many tragedies and survival stories.

In Greece there are 51,000 registered refugees, of whom 21,000 are children, and the proportion of unaccompanied minors arriving in Europe increased by 31% in 2017. In this context, children are the most vulnerable sector of the population, many of whom have gone through traumatic experiences, have lost their social contacts and have had their education interrupted.

Statement by Jordi Cardoner, first vice-president of FC Barcelona and the Barça Foundation

"On a day like today we would like to declare our commitment to the refugee population, and especially the thousands of children and young people. Through our programmes, we have managed to improve their emotional wellbeing, doing so using sport as an agent for social change. In two years, we have reached more than 24,000 beneficiaries”.