Allianz becomes global partner and extends agreement with Club until 2024 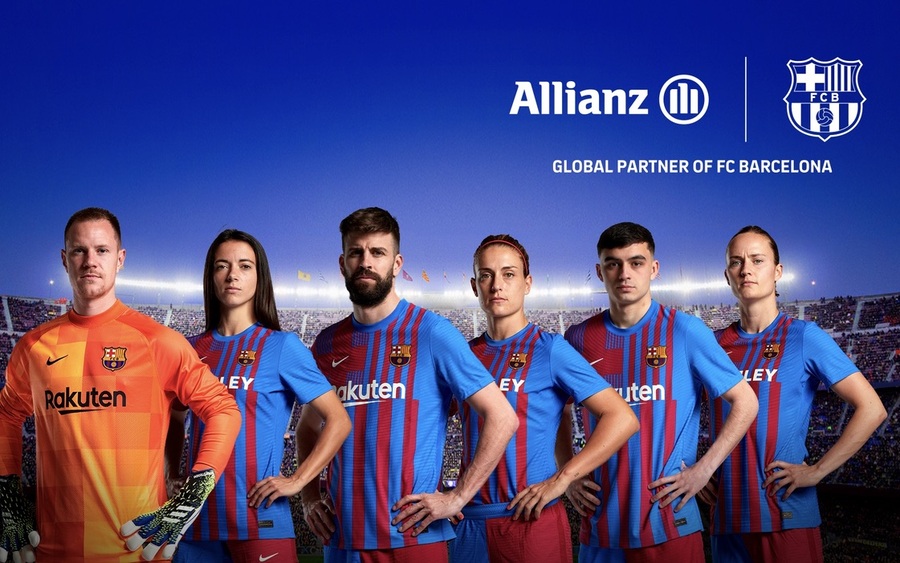 FC Barcelona and Allianz have renewed their partnership for the next three seasons, until June 2024. Via this new agreement the two organisations extend and strengthen their relationship, which until now was regional in nature but moving forward will be global, excluding China

To celebrate the beginning of this new era, the Barça players will wear the Allianz logo on their shirtsleeve in the preseason fixtures against Stuttgart and Salzburg. The first of these games will come on 31 July in Germany with the second against the current Austrian league champions on 4 August.

The widening of the partnership agreement between FC Barcelona and Allianz has been made possible thanks to the close relationship between the two parties after having worked together over the last ten years and they now take another step forward in their strategic alliance.

It is a partnership that is looking to the future after the limitations placed on the world of sport due to the pandemic. A future in which the objective is to promote various projects based on a shared philosophy of confidence, self-improvement, and mutual support.

It is in this context that FC Barcelona and Allianz will collaborate on activities in line with the pillars that have made Barça ‘More than a Club’ such as their support for women’s football, their social commitments, their constant search for innovation and their commitment to sporting excellence and a unique style of play. For that reason, the agreement extends not only to the first team but also the Barça Women and Barça B with regards to associated image rights. At the same time, FC Barcelona and Allianz will work together via the Foundation, Barça Innovation Hub and the Barça Academy on concrete long-term projects that have an impact on these areas that form part of the Club’s essence.

Within the social area, Allianz and the Barça Foundation will launch a new project Confidence in Tomorrow & Barça Foundation within their programme for social inclusion and that will benefit 200 children in vulnerable situations in the Barcelona Metropolitan Area.

Via the Barça Foundation’s Futbolnet methodology, the project promotes the inclusion of children and young adults from vulnerable communities affected by poverty, disability, illness, inequality and different forms of discrimination. The objective is to promote equal opportunities to children and young people at risk of social exclusion, whether it be for socio-economic reasons, gender, ability or origins.

Within the framework of the partnership, Allianz will also be one of the principal partners at the sporting innovation congress, Sports Tomorrow Congress, organised annually by BIHUB, the platform for scientific research, innovation, and dissemination of FC Barcelona knowledge. Taking advantage of the forum, the Club and Allianz will launch a competition for start-ups to help support initiatives connected to the promotion of wellbeing and healthy habits.

Barça Academy, bring unique style of play to the world

With regards to Barça Academy, Allianz will be present at the Barça Academy World Cup, the international competition that every year brings together more than 2000 boys and girls from the Barça Academies from around the world in other to carry out Clinics and events based around competition.

The extension of the agreement between FC Barcelona and Allianz is part of the strategy of global expansion for the blaugrana entity and strengthens their commitment to finding the best agreements possible in all areas of partnership to help the Club to continue to be a model not just on the field but also in the area of partnership and sports marketing.

The Allianz Group is one of the world's leading insurers and asset managers with more than 100 million private and corporate customers in more than 70 countries. In 2020, over 150,000 employees achieved total revenues of 140 billion euros and an operating profit of 10.8 billion euros for the group. In Spain, Allianz Seguros is its main subsidiary and one of the leading companies in the insurance sector in the country.

Based on the company's purpose, ‘We secure your future’, Allianz works every day to support its clients, agents and brokers in their day-to-day lives, to build a better future for the society. For this reason, it makes a clear commitment to the positive values that sport contributes, which articulates through initiatives such as the worldwide insurance partnership with the Olympic & Paralympic Movements from 2021-2028, support for the ADO Plan, the seven stadiums Allianz-named (such as the Allianz Arena in Munich) or the agreement with FC Barcelona.