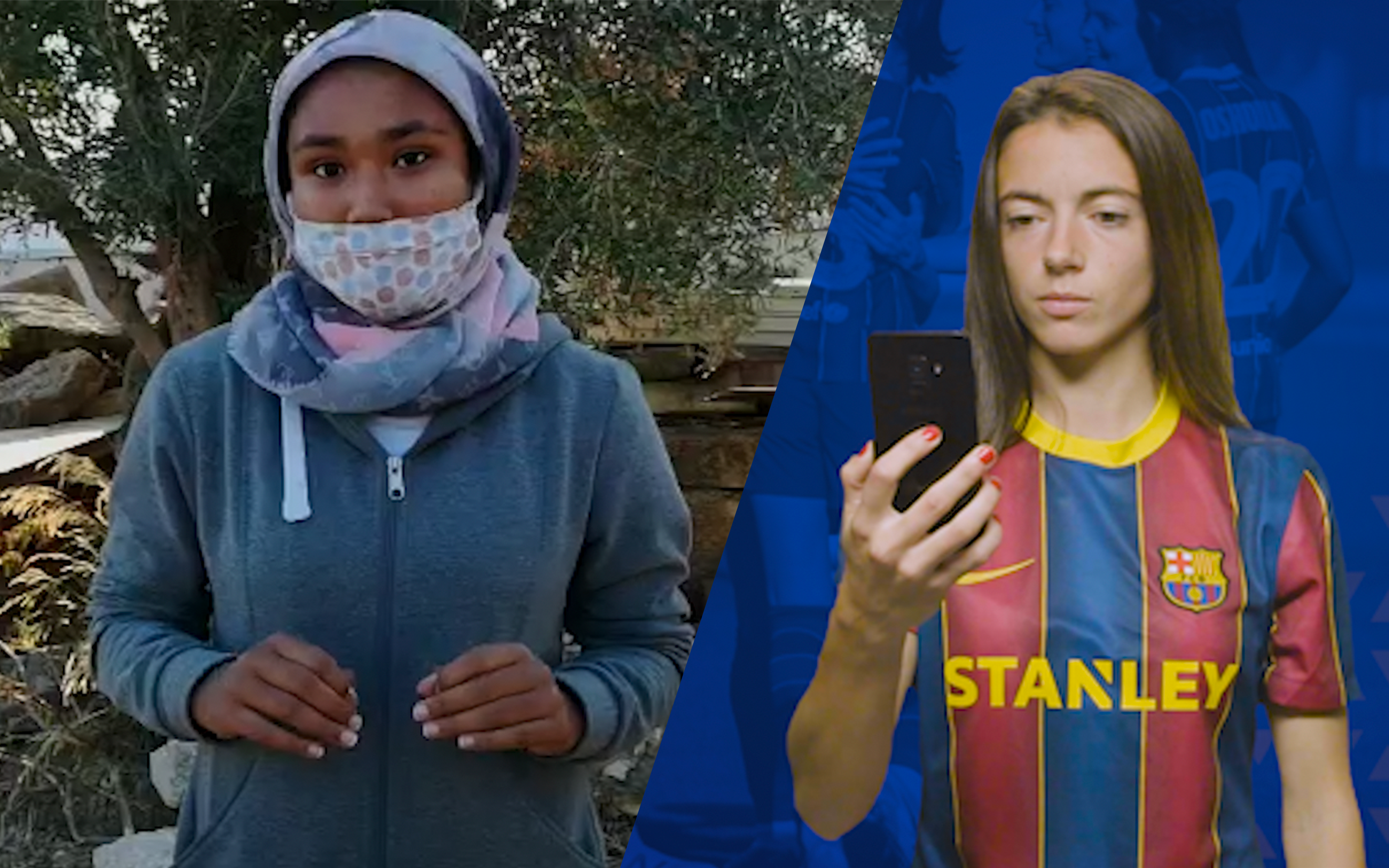 Since 2016, the Barça Foundation has been running its Refugee and Migrant Program in Greece, Lebanon, Italy and Catalonia

Neda is 14 years old and fled Afghanistan. She lives on the Kara Tepe refugee camp, halfway between Moria and the capital Mytilene, and is participating in the Barça Foundation’s program. The situation has become even more difficult under lockdown due to the Covid-19 pandemic and following last September’s fire at the Moria refugee camp, the largest in all of Europe and where the Barça Foundation is supporting a group of refugee children.

In a video that she was able to record on the mobile phone of one of the educators on the Foundation’s program at Kara Tepe, Neda tells Aitana that “we couldn’t leave the house, we didn’t go to class and we couldn’t even see our friends. Feeling even more isolated discouraged us a lot. Some mornings I didn’t even want to get out of bed.”

Neda, a fan of Barça’s Women’s team, loves to do sport and says to Aitana that: “I want lockdown to end so I can go out. Sport is a fundamental part of my life. Not only does it help me take my mind off things, but it also makes me a better person.” In the video, she also gets to ask Aitana Bonmatí what it meant for her to be an independent woman and how her life has changed since becoming a professional footballer.

Thanks to this video message, Aitana Bonmatí, who supports the Barça Foundation’s refugee and migrant program, has been able to find out, from a direct witness, about the situation that thousands of children are currently living in, locked up inside refugee camps in Europe and around the world. She was also able to send a message of encouragement from herself and the rest of the team at such a delicate time on the island following the fire at the Moria camp. She also tells Neda that it is a privilege for her and her team-mates to know that they have admirers with such a fighting spirit.

Aitana was almost the same age as Neda is now when she arrived at La Masia. In 2013, she was considered the “breakthrough player of the year.” Two young people of the same age, with different destinies, but with the same dreams.

Several players from the women’s first team are supporting the Foundation’s programs in the form of various actions that will be carried out in the coming months.

The program works to improve the emotional well-being of refugee and migrant youngsters through sport, while also encouraging them to integrate with peers of other nationalities and from the local community.

This program was set up in 2016 with the participation of more than 24,000 girls and boys in Lebanon, Greece, Italy and Catalonia, both on refugee camps and in unaccompanied schools and juvenile centres.